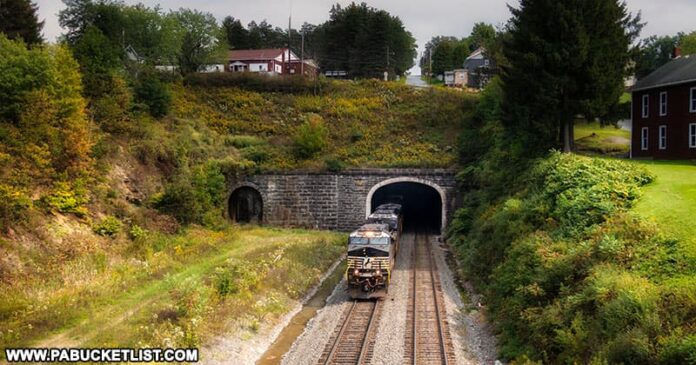 The Gallitzin Tunnels are a trio of railroad tunnels through the Allegheny Mountains in Cambria County.

Completed at different times between 1854 and 1904, these three railroad tunnels are all important historic sites, and two of them are still crucial rail passages to this very day.

History of the Gallitzin Tunnels

The oldest of the three tunnels is the Allegheny Tunnel, built by the Pennsylvania Railroad between 1851-54.

Both the Allegheny and New Portage tunnels have been enlarged and are still in use; the Gallitzin Tunnel was taken out of service in 1995.

Today railfans have a beautiful spot to watch trains enter and exit the Allegheny Tunnel in Gallitzin in the form of Tunnels Park.

Located right next to the western portal of the Gallitzin and Allegheny tunnels, Tunnels Park is a convenient place to park and safely watch trains pass through, as they have for more than 150 years.

If navigating by GPS, use 548 Convent Street, Gallitzin, PA 16641 as the address to find the parking area at the Gallitzin Tunnels Park.

The park is well-marked, well-maintained, and if you see a red caboose, you’ll know you’ve found it!

The Jackson Street Overpass next to the park offers great views of the tracks and tunnels from walkways on either side of the bridge, with special cut-outs in the fence specifically designed to allow for photography and/or videography.

And whether it’s Norfolk Southern freight trains or Amtrak passenger trains, it’s hard to beat the close-up views at the Gallitzin tunnels.

As you watch literally hundreds of double-stack freight cars pass beneath your feet every time a train goes by, you quickly realize how much the railroads still matter to the distribution of goods in America.

Between trains, you might even catch a maintenance truck making its way through the Allegheny Tunnel!

Directly across the street from the Tunnels Park, you’ll find the Gallitzin Tunnels Museum, located in the same building as the public library and the local police department.

A one-room affair, it’s not nearly as comprehensive as the nearby Horseshoe Curve or Altoona Railroaders museums, but the Gallitzin Tunnels Museum is still worth a visit if it happens to be open when you visit the tunnels.

Trains have been passing through the Gallitzin Tunnels from more than 150 years, and whether you’re simply a curious onlooker or a hard-core railfan, Gallitzin Tunnels Park is a place you must visit at least once in your lifetime!

The thrill of first hearing the whistle and then seeing the trains emerge from the Allegheny Tunnel is something both young and old alike can enjoy in this beautiful and historic park setting in Cambria County.

In conjunction with the Gallitzin tunnels a few miles to the west, the Horseshoe Curve allowed trains to cross back and forth over the steep Allegheny Mountains, something that had been impossible before 1854.

The Altoona Railroaders Memorial Museum in neighboring Blair County celebrates the lives of both railroad workers and railroading communities in central Pennsylvania.

The 5 Best Railroad Overlooks Near Altoona is your guide to even more great “trainspotting” destinations near the Gallitzin Tunnels.

Railfans of all ages will certainly want to check out the East Broad Top Railroad in Huntingdon County, back to offering train rides and shop tours in 2021!

Currently, the East Broad Top Railroad is using one of their diesel engines to pull passenger cars on sightseeing excursions, with plans to have at least one of their steam locomotives ready to go for the 2022 season.

Speaking of riding the rails, the Rockhill Trolley Museum is the oldest operating trolley museum in Pennsylvania.

“Operating” being the important distinction here, as the Rockhill Trolley Museum is a museum where you get to ride the exhibits!

Railroad history lovers will enjoy this article about the abandoned South Penn Railroad Aqueduct in Fulton County, a perfectly-preserved remnant of a railroad that never was!

When William Vanderbilt and Andrew Carnegie set out to build a railroad that would compete directly with the Pennsylvania Railroad in the 1880s, they bit off more than they could chew and ultimately wound up abandoned the project, leaving gems like this handcrafted aqueduct frozen in time along the route.

The Lehigh Gorge Scenic Railway in Jim Thorpe, PA is consistently ranked as one of the best sightseeing trains in the northeastern United States.

The Big Savage Tunnel in Somerset County is an early 1900s railroad tunnel that is now part of the Great Allegheny Passage rail trail.

Approximately 300 feet shorter than the Gallitzin tunnels, the Big Savage Tunnel makes for a fascinating bike ride or hiking excursion.

The abandoned Cresson State Prison is located just a few miles west of Gallitzin, and is now a privately owned attraction available for scheduled tours.

Fans of old architecture will enjoy touring more than 30 buildings from different eras at the former SCI Cresson compound that was originally built as a tuberculosis sanatorium in 1913.