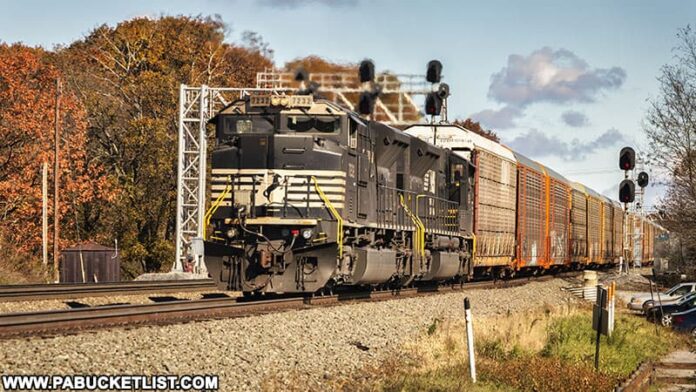 Nowhere in Pennsylvania will you find a greater concentration of railroad overlooks than the Altoona region!

And while there are historic spots for railfans to visit all across the Keystone State, you’ll find the largest number of “trainspotting” lookouts in close proximity to what was once the largest railroad town in America.

In fact, nearly 60 trains a day still travel this stretch the old Pennsylvania Railroad Main Line, making it an attractive year-round destination for railfans of all ages.

So follow along as I show you how to find the 5 best railroad overlooks near Altoona!

We’ll start with the most obvious railroad overlook near Altoona – the pedestrian bridge over the rails immediately behind the Altoona Railroaders Memorial Museum.

While there is a fee to tour the museum, there is no fee to simply walk behind the museum and out onto the pedestrian bridge over the train tracks.

You’ll hear the whistles of the approaching trains from both directions well before you see them, which gives you ample time to get your camera ready if you’re taking photos.

And the museum and surrounding structures do make for nice “industrial” photo backdrops.

Easy to get to and a great open vantage point above the tracks – that’s the railroad overlook behind the Altoona Railroaders Museum.

The Horseshoe Curve was considered one of the “engineering wonders of the world” at the time of its completion in 1854, and it continues to be one of the best railroad overlooks near Altoona.

The Horseshoe Curve lessens the steepness of the tracks for trains crossing the Allegheny Mountains, allowing for a more gradual ascent/descent.

There is a fee to enter the Horseshoe Curve, but that includes a very interesting museum tour as well.

One of the unique things about the Horseshoe Curve is the experience of having a train “wrap around” you, in the shape of a horseshoe!

Completed at different times between 1854 and 1904, the Gallitzin Tunnels are an important historic site, a great railroad overlook near Altoona, and crucial rail passages to this very day.

Today railfans have a beautiful spot to watch trains enter and exit the Allegheny Tunnel in Gallitzin in the form of Tunnels Park.

The Jackson Street Overpass next to the park offers great views of the tracks and tunnels from walkways on either side of the bridge, with special cut-outs in the fence specifically designed to allow for photography and/or videography.

And whether it’s Norfolk Southern freight trains or Amtrak passenger trains, it’s hard to beat the close-up views at the Gallitzin Tunnels.

The Cresson Railroad Observation Platform offers one of the best eye-level railroad overlooks near Altoona.

Located right next to the railroad tracks, you can see and literally feel the passing trains from this elevated deck.

There’s also a picnic pavilion and a caboose you can walk though in this park in the heart of Cresson, built especially for railfans.

The westbound trains can be seen from some distance away.

Eastbound trains can sneak up on you if you aren’t paying attention.

The Cassandra Railroad Overlook is a pedestrian-only bridge spanning the train tracks in Cassandra, Cambria County.

Until 1936 this single-lane bridge allowed cars to pass over the train tracks.

Now it serves as a prime vantage point for railfans from around the world.

Westbound trains come up on you fast around this curve if you aren’t paying attention.

Whereas eastbound trains can be seen from far away, down a LONG straightaway.

I’m not sure if the Cassandra Railroad Overlook really is “world-famous”, but since that’s the town’s claim to fame, I’ll go along with it.

So there you have it – 5 of the best railroad overlooks near Altoona!

The Allegheny Portage Railroad was the first railroad built across the Allegheny Mountains, allowing for canals on the eastern and western sides of the state to be connected, cutting the travel time between Pittsburgh and Philadelphia from weeks to just days.

After a decade-long hiatus, the East Broad Top Railroad is once again offering passenger excursions, shop tours, and visits to the “roundhouse” where their fleet of six steam engines live.

10 Must-See Attractions in Blair County is your guide to even more great things to see and do near Altoona.