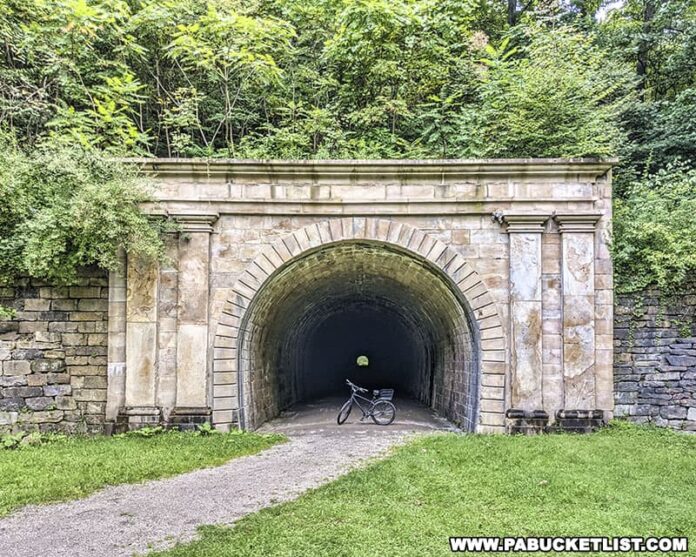 Constructed as part of the Allegheny Portage Railroad, this 901 foot-long tunnel was built between November 1831 and June 1833, progressing 18 inches each day, with crews working simultaneously on both sides eventually meeting in the center.

Today, the tunnel is operated by the National Park Service as a unit of the Allegheny Portage Railroad National Historic Site.

Visitors can hike or bike the 2.5 mile-long (one-way) Staple Bend Tunnel Trail from a parking area along Beech Hill Road in Mineral Point westward to the tunnel.

History of the Staple Bend Tunnel

The Staple Bend Tunnel was just one part of the larger Allegheny Portage Railroad, the first railroad to cross the Allegheny Mountains.

This 36 mile-long track allowed for canals on the eastern and western sides of the state to be connected, cutting the travel time between Pittsburgh and Philadelphia from weeks to just days.

Using an ingenious system of 10 inclined planes, 10 stationary steam engines, and a series of rails, cables, and pulleys, canal boats carrying freight and/or passengers could be loaded on flatbed train cars and winched up and down over the mountains, similar to how a modern day ski lift operates.

Between these 10 inclined planes were areas known as “levels” – literally flat sections of the railroad where the rail cars could be pulled by mules (and in later years by small steam locomotives).

Once across the Allegheny Mountains, the canal boats could be put back into the water to continue on their journey east or west.

The Staple Bend Tunnel exists on the “level” between the top of Incline 1 and the bottom of Incline 2, which makes for a nice flat hike or bike ride.

This historic rail trail starts at a parking area along Beech Hill Road near Mineral Point, 5 miles northeast of Johnstown.

The trail covers 2.5 miles, to and through the Staple Bend Tunnel.

You’ll find informational kiosks and restrooms at the trailhead.

The trail runs parallel to (and slightly above) both the Little Conemaugh River and the modern Norfolk Southern rail line, and it’s common to see a train pass by on your way to/from the tunnel.

You’ll also pass several elaborate culverts that were dug beneath the Allegheny Portage Railroad, so water would flow under the railbed and not over it, preventing washout or other damage to the rails.

At several points along the trail you’ll pass rows of “sleeper stones”, upon which the rails would have been mounted.

These large, square-cut stones were embedded in the ground so they were flush with the surface.

Since the rail cars on the “levels” were originally pulled by mules, not locomotives, sleeper stones were used instead of traditional wooden railroad ties so that no obstructions ran between the rails and the mules were less likely to stumble.

Each sleeper stone took an average of 24 hours of labor to cut and shape, and workers created approximately 200,000 stones for the Allegheny Portage Railroad!

The eastern portal of Staple Bend Tunnel is decidedly less ornate than its western counterpart.

At the time of its construction, BOTH portals of the Staple Bend Tunnel were decorated with a Romanesque façade.

At some point after the Allegheny Portage Railroad ceased operations in the 1850s, the east entrance façade was removed and reportedly reused on another building.

Both ends of the Staple Bend Tunnel were lined with cut stone for safety, as weather conditions near the open ends might cause rocks and dirt to fall on the train or the tracks.

The center of the tunnel still has the original hand-hewn appearance.

There is no artificial lighting inside the tunnel, and bicyclists should dismount and walk through, even if you have a headlamp.

An informational kiosk outside the western portal of the tunnel tells you more about the tunnel and the Allegheny Portage Railroad in general.

If you want to connect with history and enjoy an easy and beautiful hike or bike ride in the process, I highly recommend exploring the Staple Bend Tunnel in Cambria County!

As already mentioned, the Allegheny Portage Railroad is one of the most historic railroading sites in Pennsylvania!

The Johnstown Flood National Memorial was authorized by the U.S. Congress in 1964, preserving the remains of the South Fork Dam, the former Lake Conemaugh lakebed, the farm of Elias Unger, and the clubhouse and cottages of the South Fork Fishing and Hunting Club, owners of the lake and dam which burst in 1889, causing the flood.

The Johnstown Flood Museum in downtown Johnstown also tells the story of the 1889 flood, but from a slightly different perspective and with different artifacts, exhibits, and an award-winning film.

Visitors to the Johnstown Flood Museum can get a sense not only of the causes of the flood and the devastation in wreaked, but of the recovery and rebuilding efforts as well.

Hinckston Run Falls is a man-made waterfall formed by the outflow of the Hinckston Run Reservoir near Johnstown.

Fans of all things old, abandoned, and slightly creepy will find the abandoned Cresson State Prison in Cambria County a joy to explore!

The Gallitzin Tunnels are a trio of historic railroad tunnels through the Allegheny Mountains in Cambria County, very popular with railfans and “trainspotters”.

The Horseshoe Curve was considered one of the “engineering wonders of the world” at the time of its completion in 1854, and it continues to offer railfans an up-close opportunity to experience the thrill of trains passing by along this 2,375 foot-long curved stretch of tracks.