The Horseshoe Curve near Altoona is a must-see destination for train-lovers of all ages!

Considered one of the “engineering wonders of the world” at the time of its completion in 1854, it continues to offer railfans an up-close opportunity to experience the thrill of trains passing by along this 2,375 foot-long curved stretch of tracks.

Where exactly is the Horseshoe Curve located?

5 miles west of Altoona, along the Veterans Memorial Highway. 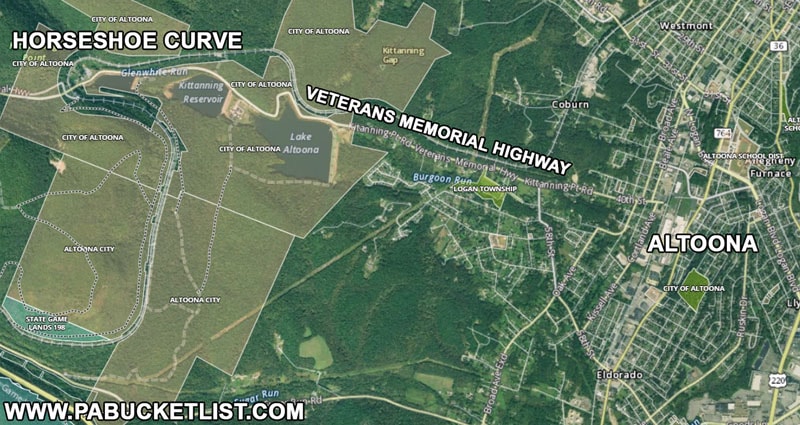 Can you navigate to the Horseshoe Curve using GPS? 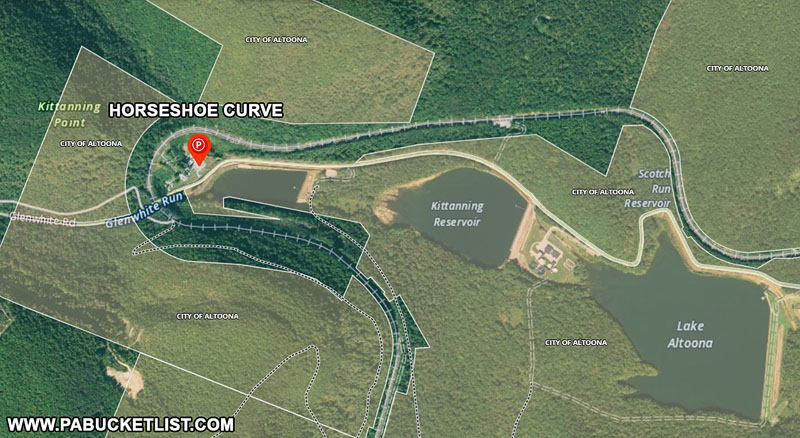 Why was the Horseshoe Curve built?

To lessen the steepness of the tracks for trains crossing the Allegheny Mountains between Altoona and Johnstown. Rather than try and go straight up or straight down the mountains, the Horseshoe Curve allows for a more gradual ascent/descent. 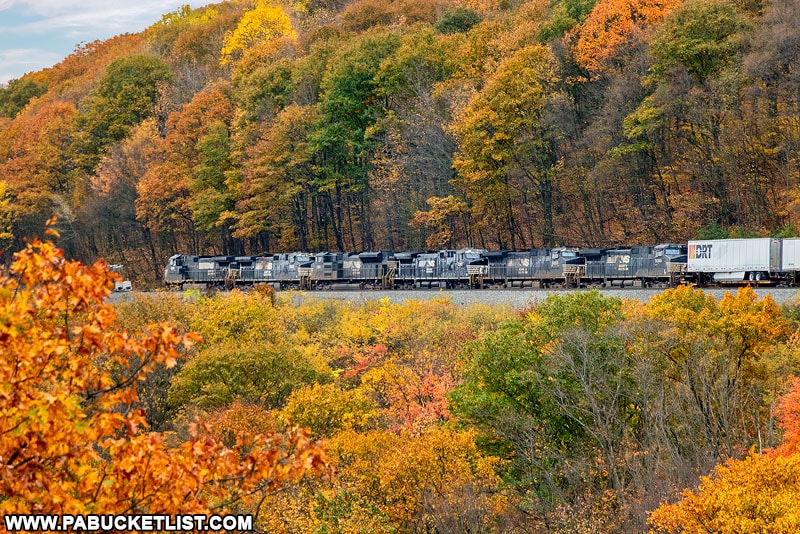 Who designed the Horseshoe Curve?

John Edgar Thomson, chief engineer and later president of the Pennsylvania Railroad, is credited with designing the Horseshoe Curve. 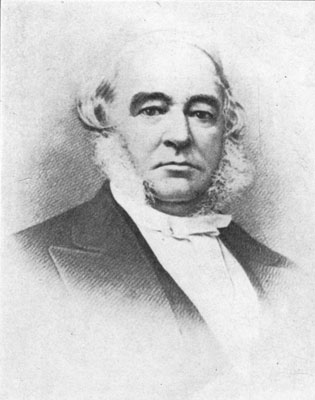 How was the Horseshoe Curve built? 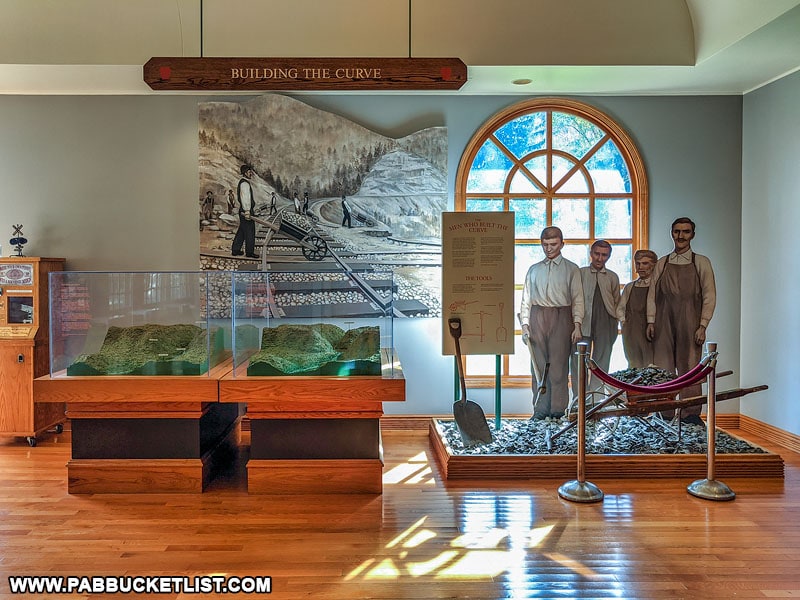 When did the Horseshoe Curve open to train traffic? 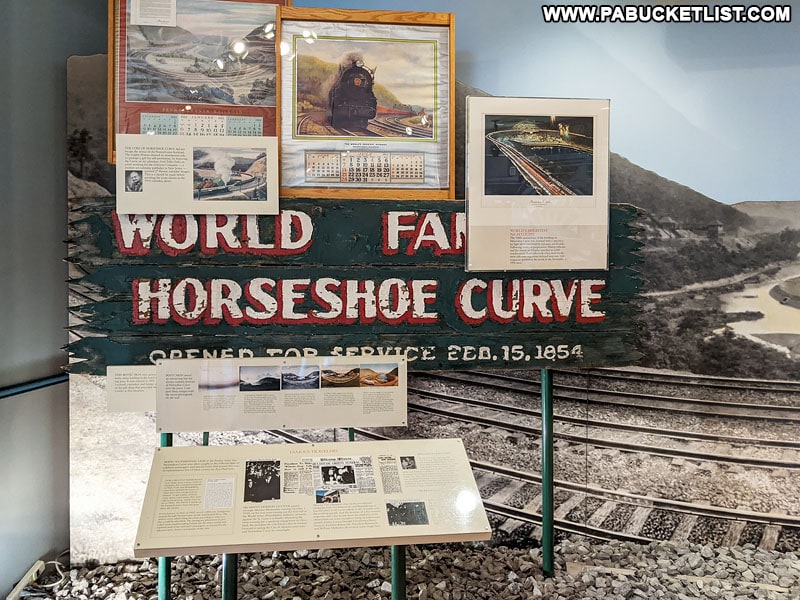 What is there to see at the Horseshoe Curve?

The Horseshoe Curve has both a museum/visitor center, as well as the viewing area to watch trains round the Curve itself. 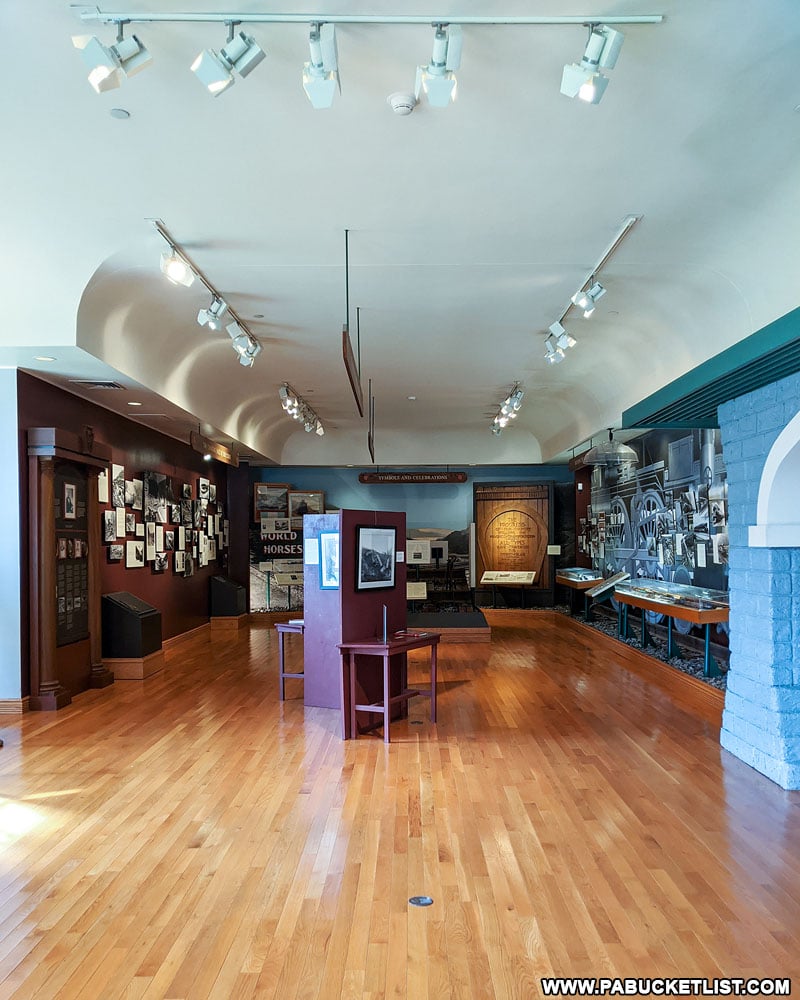 What are the visiting hours at the Horseshoe Curve?

The Horseshoe Curve is normally open to visitors Wed-Sun from 11 AM – 5 PM. Please check the official website for any announcements about closures related to COVID, weather, etc. 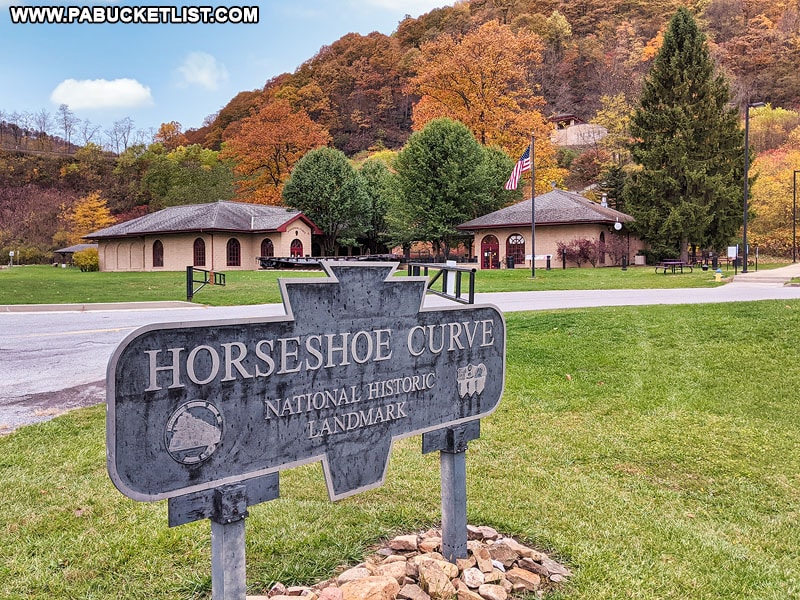 Is there an admission fee at the Horseshoe Curve? 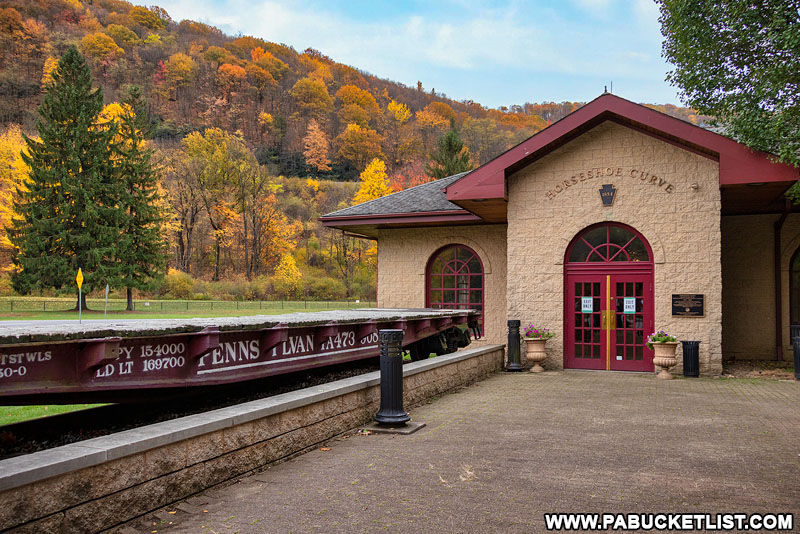 Can you ride a train at the Horseshoe Curve?

No – the Horseshoe Curve is a great spot to watch trains go by and learn about railroad history, but it is not a train station. 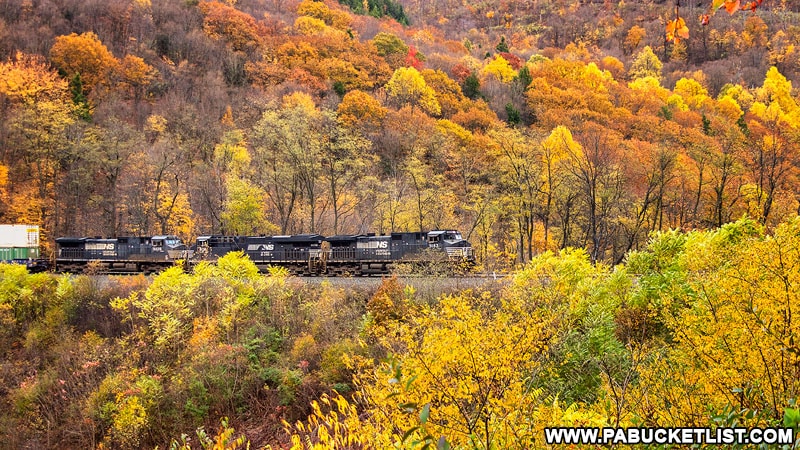 Is the Horseshoe Curve considered a historical landmark?

Yes – it was added to the National Register of Historic Places in 1966, and designated as an Historic Railroad Landmark in 2004. 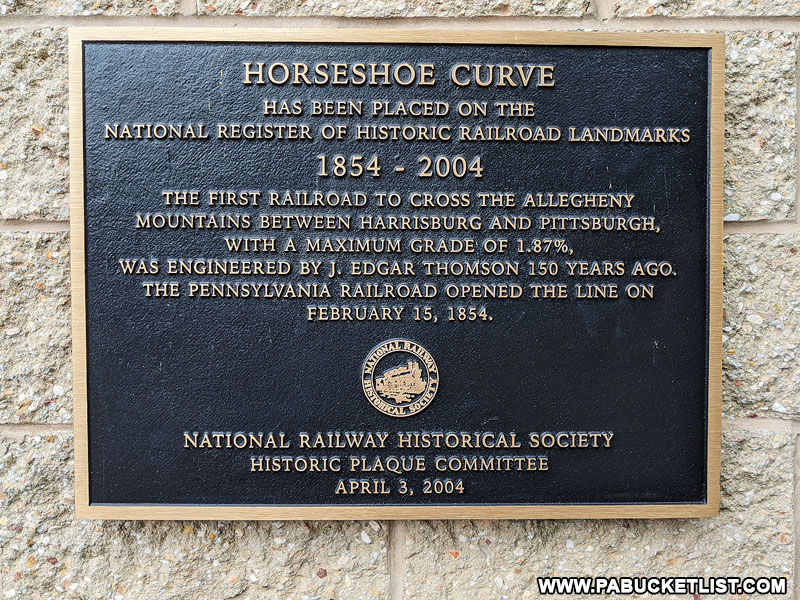 How do you get from the Visitor Center to the train viewing area at the Horseshoe Curve?

Either by taking the 194 steps pictured below on the left, or by riding the funicular/inclined plane on the right. As of October 2020 the funicular is NOT RUNNING due to COVID concerns, so your only option is the 194 steps. 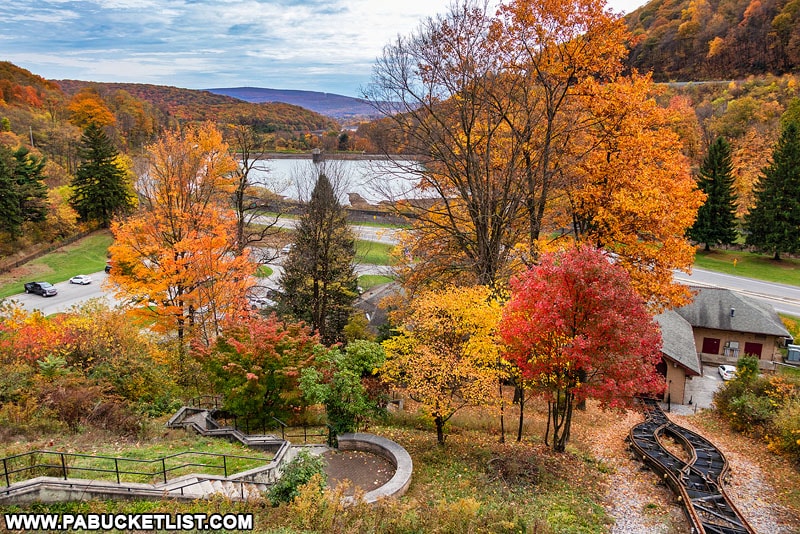 How often do trains pass through the Horseshoe Curve?

On average about once every half-hour. 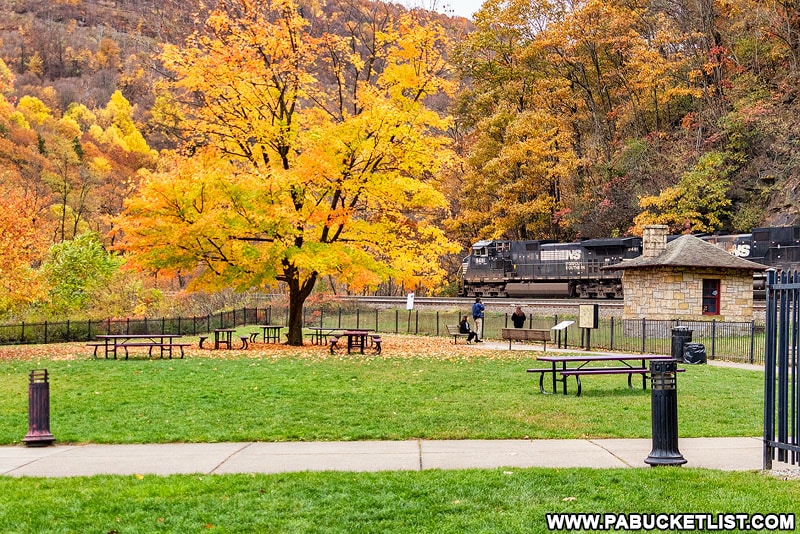 The Importance of the Horseshoe Curve

Moving people and freight between Philadelphia and Pittsburgh in the early 1800s was no small feat. It involved using canal boats and a series of inclined planes to haul those boats up and down over the mountains, a process fraught with danger and difficulties, especially in the winter months.

The opening of the Horseshoe Curve in 1854 meant the Pennsylvania Railroad could now move people and goods between Philadelphia and Pittsburgh in a mere 15 hours!

For the times, this was a miraculous achievement, and the Horseshoe Curve was listed alongside the the Panama Canal, the Empire State Building, and the San Francisco Bay Bridge as one of the “engineering wonders of the world”!

While perhaps less important to east-west travel today, the Horseshoe Curve is still a functional, working railroad landmark with many lengthy freight cars passing through every day.

In fact, the trains are so long that a single train often entirely encircles the curve with neither end in sight!

Even someone with only a casual interest in trains will find the history and natural beauty of the place enjoyable.

At the Visitor Center, viewing the numerous interpretive historical display and collections of memorabilia from over the years is like taking a trip back in time.

While the park-like setting at the train viewing area is a pleasant place to sit and enjoy the views, even when there are no trains passing by.

As mentioned previously, the funicular/inclined plane that you could normally ride between the Visitor Center and train viewing area is not running due to COVID concerns.

So you must climb the 194 steps if you want to get to the train observation area – keep that in mind if mobility issues are a concern.

Aside from that temporary inconvenience, exploring all the Horseshoe Curve has to offer is an immensely satisfying way to spend an afternoon!

The Allegheny Tunnel (known originally as the Summit Tunnel) in nearby Gallitzin was the longest railroad tunnel in the world at the time of its completion, at 3,612 feet.

Completed at the same time as the Horseshoe Curve (1854), the Allegheny Tunnel is still in use to this day, and the Gallitzin Tunnels Park next to it is a popular spot for railfans to congregate and watch trains enter and exit the tunnel.

The 5 Best Railroad Overlooks Near Altoona is your guide to even more excellent “trainspotting” destinations near the Horseshoe Curve.

Tytoona Cave is part of a 6.8 acre Nature Preserve between the cities of Tyrone and Altoona in Blair County.

The abandoned lime kilns at Canoe Creek State Park were once a destination serviced by the Pennsylvania Railroad, as it picked up lime produced there and hauled it to the steel mills in Pittsburgh.

The ghost town of Scotia near State College was another destination the Pennsylvania Railroad once serviced, as it hauled iron ore mined there to Andrew Carnegie’s steel mills in Pittsburgh.

Railfans will be happy to know that the East Broad Top Railroad is back to offering train rides and shop tours in 2021!

Currently, the East Broad Top Railroad is using one of their diesel engines to pull passenger cars on sightseeing excursions, with plans to have at least one of their steam locomotives ready to go for the 2022 season.