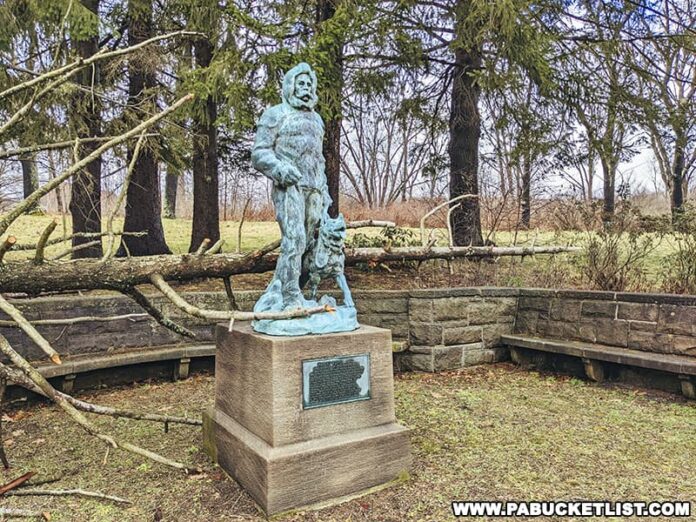 Beginning in 1886, Peary made numerous expeditions to the Arctic, culminating in his reaching the North Pole on April 6, 1909.

Although there was/is some debate as to whether he really did reach the North Pole, the National Geographic Society, as well as the Naval Affairs Subcommittee of the U.S. House of Representatives, credited Peary with achieving the feat.

Robert Edwin Peary was born on May 6, 1856 in Cresson, Cambria County, to Charles N. and Mary P. Peary.

The Robert Peary Monument stands approximately 100 yards from his birthplace, which no longer exists.

At first glance, the monument appears to depict Bigfoot walking his dog!

But once you’ve looked at some historical photos of Admiral Peary in his fur parka, standing next to his sled dogs, the statue actually looks remarkably accurate.

A plaque at the bottom of the monument lists some of the accomplishments Admiral Peary is credited with .

Although Peary only lived in Cresson for the first three years of his life (Peary and his mother moved to Portland, Maine after his father died in 1859), the highway passing his birthplace and a nearby school are named in his honor.

How to Find the Admiral Peary Monument

Admiral Peary accomplished a great deal during his lifetime, and the monument and park commemorating his birthplace makes for an interesting quick visit when exploring other attractions in Cambria County.

Exploring the Abandoned Cresson State Prison in Cambria County takes you inside the razor wire and concrete cell blocks of this former medium-security state prison, which closed in 2013.

The Horseshoe Curve Near Altoona is a must-see destination for railfans of all ages!

Hinckston Run Falls in Cambria County is a man-made waterfall formed by the outflow of the Hinckston Run Reservoir near Johnstown.