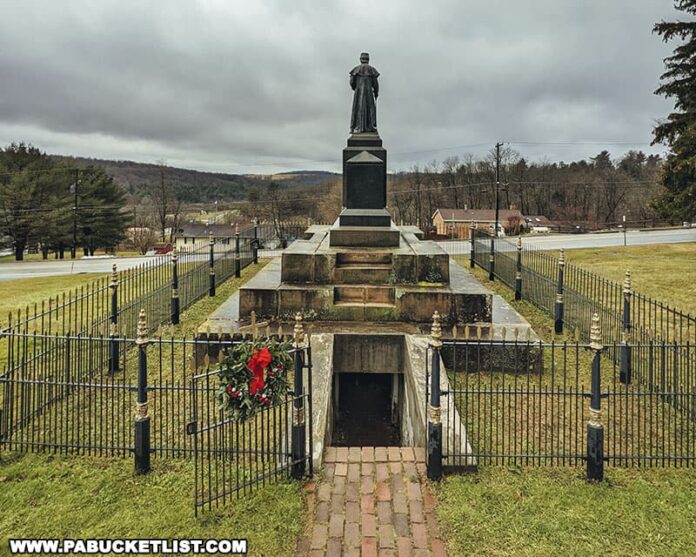 Born the son of the Russian ambassador to France and Holland, Gallitzin came to the United States when he was 22 years old, entered the Catholic priesthood under an assumed name (Augustine Smith), and essentially gave up his chance to live as a Russian aristocrat to become a frontier priest in America.

In 1799, Gallitzin founded Loretto, the only English-speaking Catholic settlement west of Baltimore, and named his church in honor of Saint Michael the Archangel.

For 41 years, Prince Gallitzin traveled the Allegheny Mountains, living in poverty, performing his duties as a Catholic priest, and building up the Catholic community in the area.

One of Gallitzin’s favorite places to stop on his travels was a spring along what is today old Route 22.

That roadside spring is now called Gallitzin Spring in his honor.

Father Gallitzin ministered dutifully until the end of his life, and died at Loretto on May 6, 1840, at age 69.

He was buried, according to his wishes, in a simple grave midway between his residence and the church.

In 1899, on the centennial of the founding of Loretto, Father Gallitzin’s gravesite was capped by a pedestal of granite and a bronze statue, donated by former Loretto resident Charles M. Schwab, who also paid for the construction of the large stone church that stands there today.

Prince Gallitzin’s remains were taken from a decayed wooden coffin and placed in a cast iron casket, which is visible today in the crypt beneath the statute and marble slabs.

There are 5 steps leading down to the crypt, and you must crouch/kneel (fittingly) to reach the coffin.

The faithful routinely leave prayer requests on Prince Gallitzin’s coffin, and in 2005 Gallitzin was named a Servant of God, the first step on the path to possible sainthood.

The Sunken Gardens at Mount Assisi are part of the beautifully manicured grounds of the Saint Francis Friary in Cambria County.

Open to the public from dawn until dusk and free of charge, the Sunken Gardens at Mount Assisi are comprised of 3.5 acres of fountains, statues, and gorgeous landscaping, some of which dates back more than 100 years!

The Gallitzin Tunnels are a trio of historic railroad tunnels through the Allegheny Mountains in the small town of Gallitzin, named in honor of Prince Gallitzin.

In conjunction with the Gallitzin tunnels, the World Famous Horseshoe Curve allowed trains to cross back and forth over the steep Allegheny Mountains, something that had been impossible before 1854.

Fans of all things old, abandoned, and slightly creepy will find the abandoned Cresson State Prison in Cambria County a thrill to explore!

The Johnstown Flood Museum in downtown Johnstown also tells the story of the 1889 flood, but from a slightly different perspective and with different artifacts, exhibits, and an award-winning film of its own.