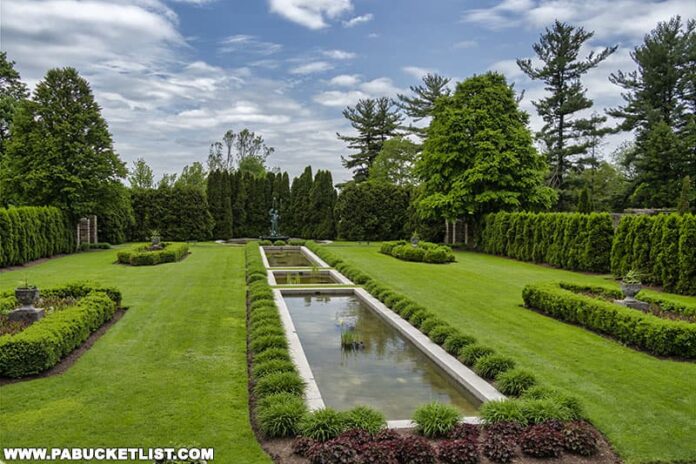 The Sunken Gardens at Mount Assisi are part of the beautifully manicured grounds of the Saint Francis Friary in Cambria County.

Open to the public from dawn until dusk and free of charge, the Sunken Gardens at Mount Assisi are comprised of 3.5 acres of fountains, statues, and gorgeous landscaping, some of which dates back more than 100 years!

History of the Sunken Gardens at Mount Assisi

The Sunken Gardens were originally a small part of the 1,000 acre summer estate of Charles M. Schwab, Andrew Carnegie’s trusted lieutenant and the first president of the United States Steel Corporation.

Schwab was raised in Loretto, and while he had a large mansion in New York City, he wanted a summer getaway in his hometown.

The Sunken Gardens were designed by the nationally known landscape engineer Charles Wellford Leavitt Jr., whose works ranged from country estates, colleges, and town plans to Forbes Field in Pittsburgh.

Schwab got to enjoy the Limestone Castle and Immergrün for 10 years, until the stock market crash of 1929 wiped out most of his fortune.

Schwab died heavily in debt in 1939, and the Limestone Castle in Loretto was purchased by the Friends of Saint Francis College in 1942.

Today the mansion is a friary for the Franciscan Monks at Mount Assisi, and the Sunken Gardens are graciously made available to the public by the monks.

The Sunken Gardens at Mount Assisi are “sunken” into a symmetrical, rectangular-shaped plot of land below the Limestone Castle.

A series of nine waterfalls cascade down the steep hill from the home, ending in three reflecting pools and a fountain in the gardens.

At either end of the rectangular gardens you’ll find curved walkways that house the Stations of the Cross.

This ornate limestone staircase descends from the mansion-turned-friary into the Sunken Gardens.

Opposite the staircase, on the south side of the gardens, you’ll find this amazing fountain.

On the northeastern side of the gardens you’ll find what is called the Rock Garden.

A Statue of Saint Michael the Archangel is the focal point of the Rock Garden.

If you get tired while walking the gardens, there are ample places to sit and relax.

The Shrine of Our Lady of Fatima

Added to the gardens in 1950, the Shrine of Our Lady of Fatima is a place of prayerful beauty.

The Shrine was constructed by Father Bernard Cuskelly, who attributed his recovery from serious illness to the intercession of the Virgin Mary.

Directions to the Sunken Gardens at Mount Assisi

In 1799, Gallitzin founded Loretto, the only English-speaking Catholic settlement west of Baltimore, and named his church in honor of Saint Michael the Archangel.

The Gallitzin Tunnels are a trio of historic railroad tunnels through the Allegheny Mountains in the small town of Gallitzin, named in honor of Prince Gallitzin.

In conjunction with the Gallitzin tunnels, the World Famous Horseshoe Curve allowed trains to cross back and forth over the steep Allegheny Mountains, something that had been impossible before 1854.

Fans of all things old, abandoned, and slightly creepy will find the abandoned Cresson State Prison in Cambria County a thrill to explore!

The Allegheny Portage Railroad was the first railroad built across the Allegheny Mountains, allowing for canals on the eastern and western sides of the state to be connected, cutting the travel time between Pittsburgh and Philadelphia from weeks to just days.