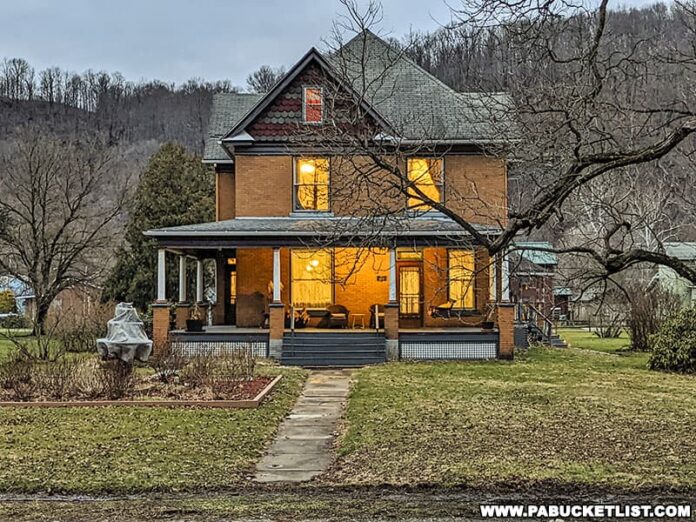 Did you know you can spend the night in the house made famous by the 1991 psychological thriller “The Silence of the Lambs”?!

Made famous, of course, as the lair of fictional serial killer Buffalo Bill in the Academy Award-winning film.

Thanks to Chris Rowan, an film industry Art Director & Prop Stylist who purchased the Fayette County house in 2020, it is now a one-of-a-kind vacation rental.

As a big fan of horror films myself, the chance to spend the night in the house where the dramatic conclusion of “The Silence of the Lambs” was filmed was one opportunity I couldn’t pass up.

So follow along as I show you room-by-room what you can expect to see and experience if you spend the night at “Buffalo Bill’s House”, roughly 30 miles south of Pittsburgh.

The front porch of the home looks very much like it did in the movie, when FBI Agent Clarice Starling (played by Jodie Foster) first meets Buffalo Bill (played by Ted Levine).

For diehard fans of the film, standing there is a dream come true!

The foyer is beautiful, decorated with numerous bits of “The Silence of the Lambs” memorabilia.

The living room is a great place to relax.

Although it didn’t play a big part in the movie, it’s a terrific spot to WATCH the movie while spending the night!

Or maybe you’d prefer to read the novel the film was based on – copies of the book and the film are provided for your enjoyment while staying there.

The parlor is decorated with additional “The Silence of the Lambs”-themed artwork.

Death’s-head moths are a recurrent theme throughout the house, a macabre calling card used by Buffalo Bill in the film.

The dining room, which was prominently featured in the film, is decorated in stunning Victorian fashion.

Using the “then and now” film scenes book provided for guests of Buffalo Bill’s House, you can visualize exactly where the actors stood during filming.

“Having friends for dinner” takes on new meaning here!

And not only is the kitchen functional (and available for guests to use, like any other vacation rental), but it’s also where the door to the basement and Buffalo Bill’s “workshop” is located (the door on the far left).

If you go into the basement expecting to see the pit/well where Buffalo Bill kept his victims, you won’t find it – that scene was filmed on a soundstage in a Pittsburgh warehouse.

What you WILL find is a great reproduction of Bill’s “sewing room”, where he also dances in one scene while the Q Lazzarus song “Goodbye Horses” plays in the background.

Although it isn’t featured in the movie, the second floor is where you’ll find four bedrooms and one bathroom, each with its own “The Silence of the Lambs”-themed décor.

The Hannibal room (above) and the Clarice room (below) are two of your options.

The Precious room (named after Buffalo Bill’s dog) is perfect for kids.

The Buffalo Bill Suite is (naturally) the largest of the bedrooms, and where I spent the night.

The bathroom features a clawfoot tub/shower and an appropriate custom shower curtain.

Spending the night in “The Silence of the Lambs” house was a fabulous experience!

Not only is it an exquisite old house in its own right, but the attention to detail and all the subtle (and not-so-subtle) tributes to the plot of the film make the experience all the more memorable.

An added attraction (if you like trains, like I do) is the railroad tracks that pass directly in front of the house.

A beautiful attached gazebo is the perfect spot to enjoy your morning coffee.

If YOU want to book a stay at Buffalo Bill’s House, you can do so HERE.

For those that simply want to tour the house, you’ll find information on how to do that HERE.

In either event, you’ll be standing on the spot where movie history was made.

“The Silence of the Lambs” was a box office hit and a critically-acclaimed film, winning Best Picture, Best Director, Best Actor, Best Actress, and Best Adapted Screenplay at the 1992 Academy Awards.

Spending the night in “The Silence of the Lambs” house makes you a small part of that history as well!

The “haunted Quaker Church” just outside of Perryopolis is famous for what allegedly happened there long ago.

During the “Satanic Panic” of the 1980s, rumors surfaced that a local witch had been secretly tried and executed in the former Quaker meeting house, and that (predictably) the ghost of the witch now haunted the current chapel and cemetery.

Gene and Boots Candies in Perryopolis is a third generation family business and a western PA tradition!

Gene and Boots specializes in homemade chocolates, and also offers 20 different varieties of their own homemade hard ice-cream.

The Layton Bridge and Tunnel are a pair of historic structures in Fayette County, originally constructed for the Washington Run Railroad in the late 1890s.

In 1933 the bridge and tunnel were converted to single-lane automobile use, and they are still used for that purpose to this day.

15 Must-See Attractions in Fayette County is your guide to even more natural and manmade destinations nearby.