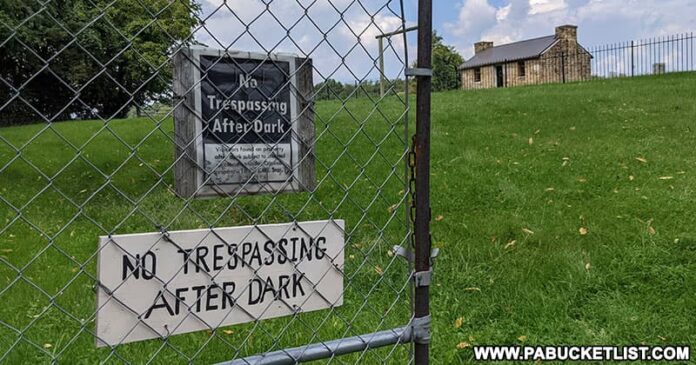 What is certain is that the current stone chapel sitting in the middle of this historic Quaker Cemetery was constructed in 1895, built upon the ruins of a prior Quaker Meeting House that had been in use from 1793-1870.

In fact, stones from the original Quaker meeting house were used to construct the current 1895 chapel.

What is also certain is that there are nearly 500 souls laid to rest in this cemetery, although there are far fewer headstones, as Quaker tradition included using unmarked graves to bury the dead.

What allegedly happened here became the stuff of urban legend during the “Satanic Panic” of the 1980s, when rumors surfaced that a local witch had been secretly tried and executed in the former Quaker meeting house, and that (predictably) the ghost of the witch now haunted the current chapel and cemetery in Fayette County!

Additional stories surfaced (again, in the 1980s) that people driving past the cemetery at night had encountered “hellhounds” guarding the grounds, and that Satanic cults were now using the chapel for nefarious purposes!

I’ll admit that I love a good horror movie, and have enjoyed watching numerous “paranormal investigations” play out on cable TV, always with a healthy dose of skepticism.

So when I read about this so-called haunted Quaker church in Fayette County, I just had to check it out in person.

How to Find the Haunted Quaker Church in Fayette County

Naturally, you’ll find the “haunted” Quaker Church in Fayette County along Quaker Church Road, just a mile outside of Perryopolis.

It should be noted, for the sake of historical accuracy, that Quakers use the term “church” to denote the members of their congregation, and the term “meeting house” to denote the structure where the church members meet.

Quakers did not build the current 1895 stone chapel, nor would they have called it a “Quaker church” if they did.

Nevertheless, “Quaker Church Road” is the official name of the road, and the “Quaker Church” is how most people refer to the current 1895 stone chapel that stands along it today.

The current stone chapel in the center of the Quaker cemetery is a 20 feet x 30 feet rectangular structure, with iron bars over the windows and door on the front side of the structure.

So no – you cannot go inside the chapel.

You can, however, easily take pictures of the inside as there is no glass behind the bars – the interior of the chapel is simply open to the air outside.

The floors are dirt, the walls are plastered stone, and there are fireplaces on both the east and west ends of the chapel.

The current 1895 stone chapel was built to hold funeral services at the cemetery (which remained active even after the Quaker meeting house was abandoned), and as a memorial to the original Quaker roots of the property.

Please note that this is a cemetery, not a “paranormal playground”, and that you are strictly forbidden to be there after dark!

How the Quaker Church in Fayette County Became “Haunted”

To understand how the urban legends surrounding the “haunted Quaker Church” got started, you need to understand the “Satanic Panic” that gripped the United States in the 1980’s.

Economic anxieties, a resurgence in religious fundamentalism, and a overzealous media combined to create a perfect storm of social hysteria that literally saw “Satanic influences” EVERYWHERE!

Newspapers reported “Satanic influences” in everything from cartoons, to rock music, to role playing games like Dungeons and Dragons.

It got so bad that Oprah had to get involved!

So naturally, with everyone (including Oprah) on the lookout for Satanic cults, places like old churches and cemeteries became likely hotspots for “Satanic activity”, spawning local legends and tall tales galore.

In reality, the only recorded witch trial in Pennsylvania occurred in 1683, more than 100 years before the Quaker meeting house near Perryopolis was built in 1793.

The trial was presided over by the founding father of Pennsylvania, devout Quaker William Penn, and the accused were found “not guilty” of being witches.

Not only is the timeline unlikely for there to have been a “secret witch trial” at the former Quaker meeting house in Fayette County, but the Quakers were also extremely tolerant of all beliefs and not prone to the “witch hunt mentality” that gripped the Puritans in Salem, Massachusetts in the 1690s.

As for the “hellhounds”, that’s another universal myth going back centuries, to cultures all around the globe.

While there may have been a black dog chasing cars along Quaker Church Road back in the 1980’s, it’s highly unlikely he/she was of the supernatural variety.

Is There Any Evidence of the Supernatural at the Haunted Quaker Church in Fayette County?

For those of you who want to hold out hope that the Quaker Church near Perryopolis has a supernatural connection, I’ll leave you with this image.

To be honest, I didn’t even notice it while I was there at the church, but if you look closely at the upper right hand corner of the boarded-up back window, you can see what appears to be a Shroud of Turin-like image of a woman’s face, with a pronounced mouth, nose, eyes, and hair burned into the next-to-top board.

For those that want to believe the ghost of a witch dwells in the “haunted Quaker Church” in Fayette County, this may be as close as you get to hard evidence!

Taphophiles (individuals with a passion for visiting cemeteries) will be interested to learn about the Hooded Grave Cemetery in Columbia County, the only one of its kind in the United States.

The reason why the graves of two young women were “hooded” in this rural cemetery in 1852 may surprise you; I know it surprised me!

Did you know you can spend the night in the Fayette County house made famous by the 1991 psychological thriller “The Silence of the Lambs”?!

Thanks to Chris Rowan, an film industry Art Director & Prop Stylist who purchased the Fayette County house in 2020, Buffalo Bill’s House is now a one-of-a-kind “boutique accommodation” and vacation rental.

The Layton Bridge and Tunnel are a pair of historic structures in Fayette County, originally constructed for the Washington Run Railroad in the late 1890s.

In 1933 the bridge and tunnel were converted to single-lane automobile use, and they are still used for that purpose to this day.

Fort Necessity in Fayette County is the site of the first battle in what would become known in North America as the French and Indian War (and known elsewhere as the Seven Years War), a global struggle for empire between the two superpowers of that time, France and England.

The Fort Necessity National Battlefield and three related, nearby properties managed by the National Park Service each tell an important part of the story of the French and Indian War and the years that followed.

Nearby Laurel Caverns is billed as “Pennsylvania’s Largest Cave”, and is a great way to spend an hour or two BENEATH Fayette County!

Fallingwater in Fayette County was designed by famed architect Frank Lloyd Wright and was voted “the best all-time work of American architecture” by the American Institute of Architects in 1991.

Kentuck Knob in Fayette County is another nearby Frank Lloyd Wright-designed home, built in 1954 for Isaac and Bernardine Hagan, founders of the Hagan Ice Cream company in nearby Uniontown, PA.

Ohiopyle State Park in Fayette County is home to nearly 80 miles of the best hiking trails in western PA.

From rugged mountain ridges to smooth riverside rail trails, there’s an exciting trail for hikers of any skill level at Ohiopyle State Park.

Laurel Run Overlook is one of several exceptional scenic vistas along the Fayette County portion of the Laurel Highlands Hiking Trail.

Hippie Shower Falls, located along the Great Allegheny Passage in Fayette County, may be the most oddly-named waterfall in Pennsylvania!