It’s one of the longest covered bridges in all of Pennsylvania.

So if visiting the biggest and best covered bridges in PA is on your bucket list, you have to make visiting this elongated beauty a priority!

All the information you could ever need to make that visit happen is contained in this article.

Where is the Barronvale Covered Bridge?

It is approximately 5 miles west of New Centerville, or 3 miles southwest of Laurel Hill State Park.

There is a large parking area at the northeastern end of the bridge (see the map above).

History of the Barronvale Covered Bridge

Exactly when the Barronvale Covered Bridge was built is a bit of a mystery. The sign on the bridge itself says 1830.

A Pennsylvania state survey lists it as 1846.

And the World Guide to Covered Bridges lists it as 1902.

As with many covered bridges, historical records from sparsely populated rural areas during this time period are sketchy.

Who Built the Barronvale Bridge?

Cassimer Cramer is credited with building the current bridge.

However, given that the date of construction is not clear-cut, there might have been earlier bridges built by others builders at this very same site, perhaps leading to some of the confusion.

Interesting Facts and Figures About the Bridge

What is not in dispute (because we can measure it today) is that the current bridge is 162 feet, 3 inches long and 13 feet, 10 inches wide.

By comparison, the longest covered bridge in all of Pennsylvania, the Academia Pomeroy Bridge in Juniata County, is 278 feet long.

The Barronvale Covered Bridge utilizes Burr-arch trusses in its construction, the most common style of trusses used in the remaining covered bridges in Pennsylvania.

The World Guide to Covered Bridges inventory number for this bridge is 38-56-03.

It was also placed on the National Register of Historic Places in 1980 and its inventory number there is 80003633.

The Barronvale Covered Bridge is sometimes referred to (locally, at least) as the Barron’s Mill Bridge. This is because, as you might guess, a mill once stood in the large open space to the right of the bridge in the photo above.

The house in the background of the photo above was the home of the miller.

It is privately owned now, but open to the public.

Only foot traffic is permitted on the bridge. Large boulders on either side prevent vehicles from entering and damaging the bridge.

There is really no bad time to visit the Barronvale Bridge. In the spring and summer it is enveloped in greenery and wild flowers.

It also makes a great autumn location for “leaf peeping” in the Laurel Highlands.

And of course in the winter the bright red (as are all Somerset County covered bridges) bridge really stands out against a snow white backdrop.

The Barronvale Covered Bridge is an exceptionally well-maintained covered bridge that is pleasant to visit any time of the year.

The fact that it is only open to foot traffic, and has plentiful parking makes it easy to spend as much time as you want to exploring it.

The Pack Saddle Covered Bridge is the most famous covered bridge in Somerset County.

Glessner Covered Bridge is on the outskirts of Shanksville, near the Flight 93 Memorial.

If waterfalls are your thing, be sure to check out 20 Must-See Waterfalls in the Laurel Highlands.

If mountain vistas are your thing, be sure to check out Beam Rocks Overlook in the Forbes State Forest, Somerset County. 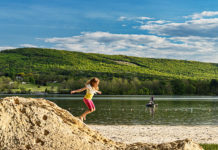 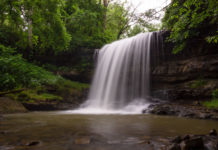 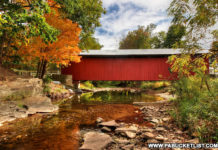 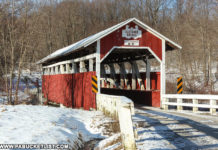 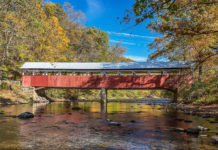 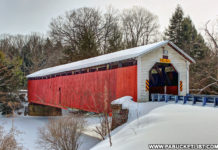 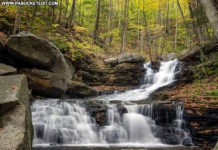 The 15 Best Waterfall Streams in Pennsylvania 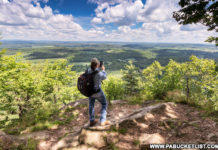