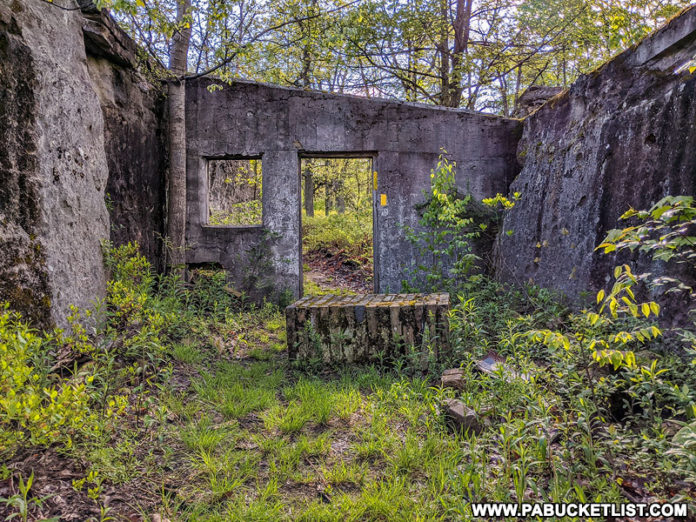 The ruins of the abandoned Kunes Camp in the Quehanna Wild Area of Clearfield County are a testament to backwoods construction ingenuity.

They’re also a reminder of a controversial Cold War-era move by the State of Pennsylvania that evicted hundreds of camp owners from this remote area to allow a private company to turn it into a hub of secretive nuclear research.

Thankfully, the forest has erased many of the scars of this mid-50’s boondoggle (with millions of dollars of taxpayer-funded clean-up thrown in for good measure), and you can now enjoy a peaceful out-and-back hike to see the remnants of this once-proud hunting camp that was ingeniously built between two massive boulders on a clearing in the Quehanna Wild Area.

How to Find the Abandoned Kunes Camp

The ruins of the abandoned Kunes Camp are both easy to find and easy to hike to.

The parking area for the Kunes Camp Trail is right along the Quehanna Highway in Clearfield County, at GPS coordinates 41.21636, -78.17210.

There is also a “Kunes Camp” post near the highway, on the same side of the road as the parking area and trailhead.

The trailhead is marked by a large boulder with a “Kunes Camp Road” sign on it.

The hike is approximately 0.9 miles one-way, from parking area to the camp ruins.

The trail is well-worn, basically flat the entire way, and yellow-blazed.

If you hike this in the spring or summer, you’ll encounter some of the finest fern-covered forest you’ve ever seen.

Exploring the Ruins of Kunes Camp

As you draw near to Kunes Camp, the forest gives way to a clearing and a field of massive boulders.

The rectangular-shaped Kunes Camp was constructed using two of these boulders for the side walls.

This gives Kunes Camp its unique appearance, while also contributing to its longevity despite being abandoned nearly 70 years ago.

It’s really impossible to miss Kunes Camp as long as you stick to the Kunes Camp Trail, as the trail literally passes THROUGH the ruins of the camp.

The wooden roof has long since rotted away, and trees now grow up out of the floor.

What is probably most remarkable about the abandoned Kunes Camp is how straight and intact the window and door frames still are, a tribute to the craftsmanship that went into building this hunting camp.

The two ends of the camp were meticulously constructed of stone and mortar, seemlessly melded into the long boulder walls.

The camp is approximately 40 feet long and 15 feet wide.

The sloped roof would have allowed rain and snow to sheet off easily, as well as providing ample headroom.

The old chimney now lies in the middle of the floor, yet is still largely intact.

There are some remarkable moss and fern formations growing on and around the foundation of Kunes Camp.

As well as a labyrinth of rock passageways to explore.

No doubt many tall tales were told and good times were shared within these four walls.

The ghosts of the past may still haunt the abandoned Kunes Camp in the Quehanna Wild Area!

There are several more outstanding sights to see close to the abandoned Kunes Camp in the Quehanna Wild Area.

The abandoned nuclear jet engine bunkers, which I mentioned earlier, are a fascinating and troubling part of Cold War-era history that played out here in Central Pennsylvania.

Wykoff Run Falls is a much more natural part of the landscape, also located just a short distance from Kunes Camp.

And Table Falls is another small but almost-roadside waterfall in the Quehanna Wild Area. 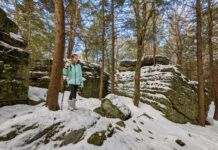 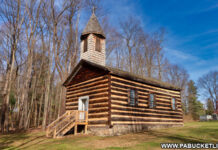 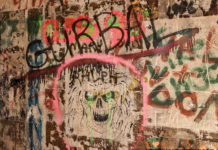 The 5 Spookiest-Sounding Hikes in Pennsylvania 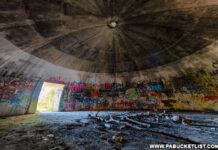 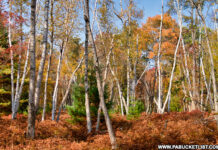 The 5 Best Roadside Attractions in the Quehanna Wild Area 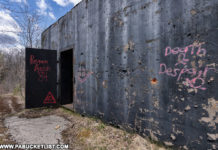 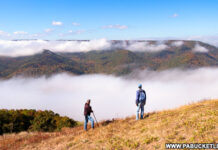 50 of the Best Scenic Overlooks in PA 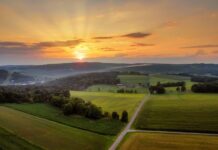 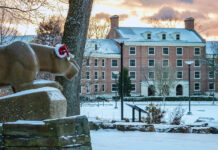