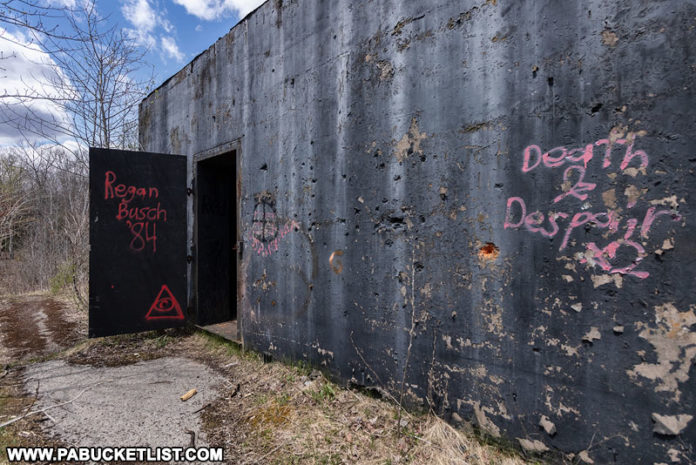 Constructed and used between 1955-1960, these bunkers continue to fascinate visitors to this day, as well as serving as cautionary reminders of how quickly public lands can be co-opted by politicians and private companies for “the greater good”.

The nuclear jet engine testing complex at Quehanna was born out of the euphemistically-named “Atoms for Peace” program, proposed by President Dwight D. Eisenhower in 1953 and created by the United States Congress in 1954.

In theory, the program was designed to find peaceful uses for nuclear technology.

In the case of the Quehanna jet engine project, the goal was to develop nuclear-powered jet engines for the United States Air Force, so that fighter planes and bombers could stay airborne indefinitely, without refueling.

The Curtiss-Wright Corporation, at the time the largest aircraft manufacturer in the United States, was awarded the contract to develop the engines.

They sought out a remote parcel of land where the project could be worked on in relative secrecy, and without endangering a large population center should the project go awry.

The State of Pennsylvania, looking to create jobs and promote industrial investment, offered Curtiss-Wright a sweetheart deal on 80 square miles of public land (State Forest Land at the time) in rural Cameron County, and a deal was struck.

However, the promise of jobs and prosperity for the entire region turned out to be just that – promises.

By 1960, the Air Force had cancelled the contracts and the nuclear jet engine bunkers were literally abandoned, becoming a party spot for teenagers and a source of scrap metal for locals.

All that remains today are the bunkers themselves – large boxes of concrete and steel with tiny slit windows once covered by thick layers of blast-resistant glass, where engineers and technicians would have monitored the engines undergoing testing.

The two nuclear jet engine testing bunkers are located approximately half a mile northwest of the intersection of the Quehanna Highway and Wykoff Run Road.

Parking for the southern nuclear jet engine testing bunker is right along the Quehanna Highway, next to a large stone mile marker with a “5” carved into it.

The hike to the southern bunker is only 1/4 mile along the remnants of a flat, paved road (making this a popular spot for cross-country skiers in the winter).

Of course the road, after nearly 60 years without maintenance, is being swallowed up by the forest, a sight to see in and of itself.

Upon hiking the 1/4 mile back the road to the bunker complex (once a 3 acre clearing but now partially covered with trees), a large mound of dirt rises up from the asphalt.

Of course when it was in use, this bunker was not covered with dirt – that was done later by the State in an attempt to turn the bunker into a bat habitat, an effort that appears to have been abandoned years ago.

What now serves as the only opening to this bunker would have at one time been a ventilation port. A tight squeeze, but an entrance that countless people have used over the years.

All that remains to be seen inside the southern bunker is 4 graffiti-covered walls and the remnants of some bat boxes.

No instrumentation, signage, or other clues to its former life are to be found anymore.

Standing on top of the mound you can survey the scene and try to imagine what sort of testing went on here in the late 50s.

Some folks say only conventional jet engines were tested here – that the nuclear jet engines never even got to the testing phase.

Others say the nuclear jet engines did in fact exist, but emitted too much radiation to be safely put into use.

One local I ran into, who claimed to know people who had worked at the facility, swore that reverse-engineered alien technology was being tested at the site!

Whatever did or didn’t happen there, it was all shrouded in a veil of secrecy, high fences, and manned security posts, making the hike all the more interesting if you’re a history or conspiracy buff.

The parking area for the northern nuclear jet engine testing bunker is located a quarter mile further down the Quehanna Highway, next to Gate 251 (the Area 51 of the Quehanna Wild Area perhaps???).

Even from satellite imagery the northern bunker complex is easy to see.

As with the road to the southern bunker, Nature is slowly reclaiming the paved road back to the northern bunker.

A 0.4 mile hike brings you out into the large opening where the testing complex was.

The biggest difference here, compared to the southern bunker, is that the northern bunker is still plainly visible, looking like a machine gun nest from a war movie.

A large, steel door protects the opening to the bunker, and it creaks with an ominous sound right out of a horror movie as you open it.

Inside you’ll find a scene similar to the southern bunker – walls covered in graffiti and the remnants of a bat habitat gone bust.

The windows (now covered in plates of steel) are on the walls opposite the door, and the engines would have been strapped to mounts visible through the windows and away from the door.

The remnants of the engine mounts are still present outside the northern bunker.

Did nuclear jet engines really rest on these mounts at some point in the late 50s?

Or were some sort of reverse-engineered alien technologies being tested here, as locals claim?

If the local elk population know, they’re not talking!

We may never know, and the real story will someday be completely swallowed up by the Quehanna plateau.

What is certain is that this is an easy hike to a historic but seemingly forgotten footnote to the Cold War arms race of the 1950s.

All of it occurring in rural Cameron County, Pennsylvania!

The abandoned Kunes Camp is an easy 2 mile out-and-back hike to the ruins of a hunting camp built BETWEEN massive boulders on the Quehanna plateau.

Table Falls is located just a few miles from the nuclear jet engine bunkers, further west along the Quehanna Highway then 1.6 miles down Red Run Road.

Round Island Run Falls is located just beyond the border of the Quehanna Wild Area, in the Sproul State Forest.

Looking for more abandoned sites to explore in Pennsylvania?

There isn’t a larger one in the state than the Abandoned Pennsylvania Turnpike, stretching from Bedford to Fulton counties.

The highlights of this 13 mile-long site are two abandoned tunnels – the Sideling Hill Tunnel and the Rays Hill Tunnel.

And while it is privately owned and legally accessible by invitation-only, the Abandoned Trolley Graveyard in Windber (Somerset County) is another apocalyptic scene right out of a sci-fi movie! 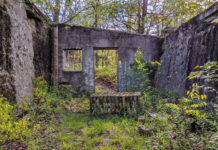 Exploring the Ruins of Kunes Camp in the Quehanna Wild Area 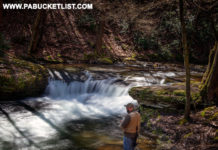 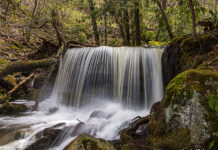 How to Find Table Falls in the Quehanna Wild Area 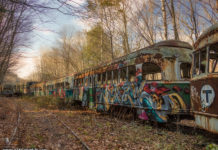 Peer Behind the Locked Gates of the Windber Trolley Graveyard 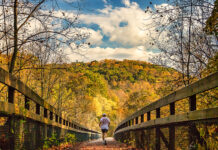 The 12 Best Places to View Fall Foliage at Ohiopyle State... 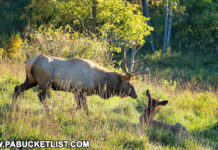 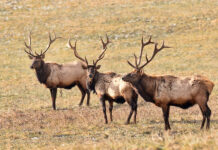 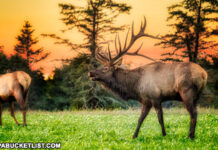