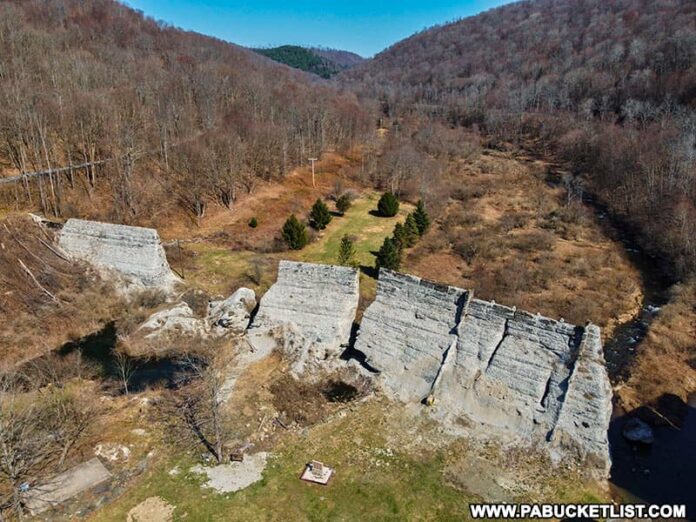 Austin Dam in Potter County was billed as “the dam that could not break” at the time of its construction in 1909.

Yet two years later it broke, with catastrophic consequences, on September 30. 1911.

At least 78 people were killed in the flood caused by the dam’s failure, as a wall of water estimated to be 50 feet tall swept down the narrow valley into the small town of Austin a mile downstream.

Today, 110 years later, the ruins of Austin Dam still stand in a park dedicated to the memory of those victims.

Austin Dam Memorial Park is a beautiful but sobering destination to explore, with trails through the towering ruins of the dam providing an up-close look at what caused the second-worst flood disaster in Pennsylvania history.

History of the Austin Dam

By the early 1900s, the tiny lumber town of Austin had already experienced several floods, fires, and a faltering economy.

The local lumbering and tannery industries were in decline as most of the virgin timber in the area had been clear-cut years before, leaving only smaller “pulp wood” trees in its place.

Enter New York industrialist George Bayless, who saw this area as an opportune site to construct a paper mill.

The paper mill required large and consistent amounts of water to operate, and the small stream named Freeman Run that the mill drew its water from simply couldn’t be counted on during summer dry spells.

So Bayless hired an engineer to design a dam, and then proceed to alter or ignore several of the engineer’s key design and safety suggestions during the construction process.

To cut costs, the walls of the dam were built too thin, the foundation was not deep enough, and there was no effective means for relieving pressure on the dam if it got too full.

Some townspeople in Austin were quite concerned about the safety of such a large dam, but the paper mill was a major employer and no state regulations existed at that time in regards to safety standards for dams.

So construction of the 50 foot-tall, 530 foot-wide structure went ahead, and the Bayless Paper Mill Dam was completed in 1909.

At 2:30 pm on September 30, 1911 the ill-fated dam broke, releasing 400 million gallons of water in a torrent that tore through the narrow valley downstream.

The flood waters first tore through the Bayless Paper Mill, killing workers and picking up stacks of wood stored nearby that further increased the destructive power of the flood as it reached the the town of Austin itself.

When it was all over the towns of Austin and Costello (a little further downstream) were destroyed, and at least 78 people (possibly more) died as a result.

Today the ruins of Austin Dam are part of the Austin Dam Memorial Park, set amongst hiking trails, picnic areas, a campground, and the ruins of the Bayless Paper Mill, the facility for which the dam was built in the first place.

The Austin Dam Memorial Park is located just north of Austin, off of Route 872 in Potter County.

A state historical marker is located along Route 872 across from the ruins of the dam.

The driveway to the park is located a mile north of the ruins.

There are numerous historical photos from the construction of Austin Dam as well as the aftermath of the flood on display at a pavillion in the park.

And a mural painted by local school children commemorates the lives lost in the disaster.

The Austin Dam ruins were placed on the National Register of Historic Places in 1987, and through this park the history and legacy of the lives lost in the Austin Dam disaster live on, for a new generation to discover and learn from.

If you’d like to camp at Austin Dam Memorial Park, you can, and you’ll find the details HERE.

The abandoned Bayless Paper Mill ruins, located just south of the Austin Dam, are the remains of the enterprise with which the dam and the disastrous flood of 1911 are forever linked.

Exploring the Ridge Road Vistas in the Elk State Forest will introduce you to Pennsylvania’s most scenic State Forest road, featuring 6 world-class ROADSIDE vistas along a 3 mile stretch of road.

Sinnemahoning State Park encompasses 1,910 acres of magnificent scenery and outstanding wildlife habitat, and spans from Cameron County in the south to Potter County in the north.

Kettle Creek State Park in neighboring Clinton County is home to a nearly 1,800 acre lake and several nearby vistas.

The Fred Woods Trail in neighboring Cameron County takes you on a loop hike past an ancient “rock city” as well as two fantastic mountain vistas.

The 20 Best Scenic Overlooks in PA Elk Country introduces you to some of the finest vistas in the PA Wilds region of Pennsylvania.

If it’s elk you seek, The 15 Best Elk Viewing Destinations in Pennsylvania is the roadmap you’ll want to follow!

Want to make your trip to Austin Dam Memorial Park even MORE epic?

Browse HUNDREDS of awesome cabins, lodges, and chalets near Austin Dam Memorial Park at the Vrbo link below.