Visiting the Windber Trolley Graveyard had been on my bucket list for years.

Having grown up in Somerset County, I’d heard of it even before the internet and “urban explorers” turned it into a destination of almost mythical proportion.

So when I received an invitation to tour the grounds, along with some folks from the local visitors bureau, I jumped at the chance.

Where is the Windber Trolley Graveyard?

The Trolley Graveyard is located at the dead end (perhaps fittingly) of 19th Street in Windber, Pennsylvania (Somerset County). It sits behind locked gates, and you should know up-front that this is private property and can only legally be seen with permission of the property owner. However, given the sprawling nature of the property and its close proximity to the local high school, it isn’t surprising that plenty of graffiti covers many of the trolley cars, as you’ll see in the photos to follow. 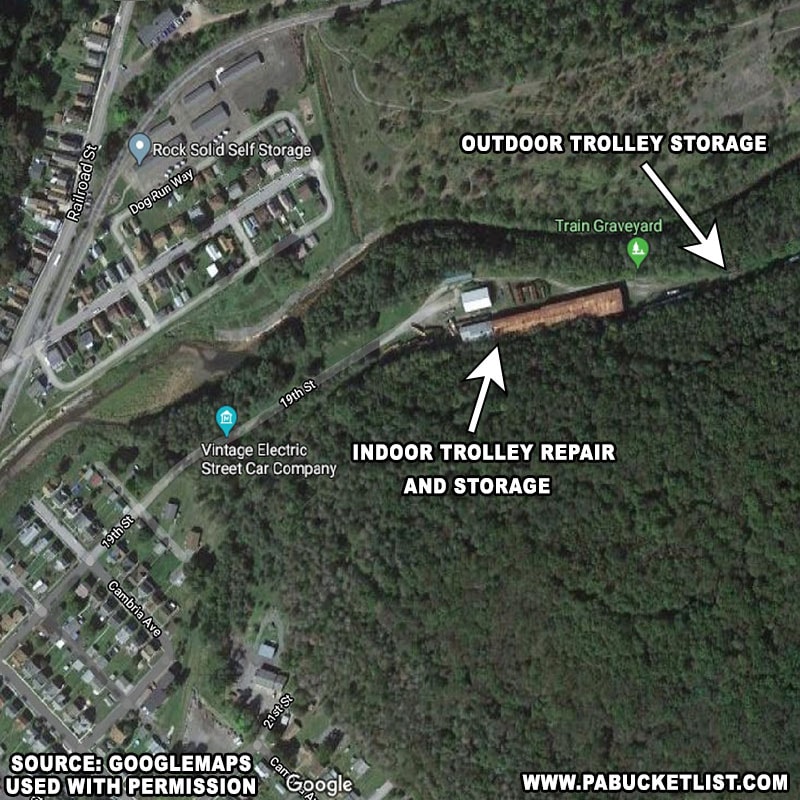 No, it is not. The actual name for the facility is the Vintage Electric Streetcar Company, and it is owned by a gentleman named Ed Metka. Ed has a passion for collecting old streetcars, with hopes to restore them and save these historic vehicles from becoming scrap metal. He began storing his collection of vintage trolleys at this former site of the Berwind Coal Company Railroad Shop in 1992, and has amassed a collection of nearly 50 trolley cars in various states of repair. 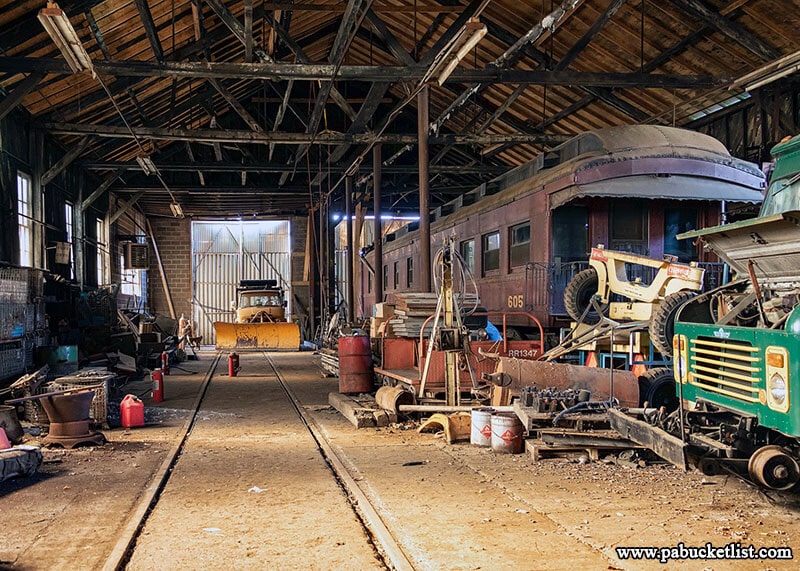 I do not. My visit was arranged by the local tourism bureau, and at the time it looked like the property might be opened up to regular tours. Unfortunately, those plans appear to have fallen through as I have neither seen nor heard of any tours being offered at this time.

A Look Inside the Windber Trolley Graveyard Repair Shop

I’d seen plenty of photos of the outside tracks area of the “abandoned trolley graveyard”. But getting to tour the inside of the repair shop with the owner was a rare treat.

I could tell Mr. Metka has a passion for history and would love to see each and every streetcar on the property restored to its former glory.

But my guess is most visitors to the site are there because of the post-apocalyptic nature of the setting. If I’m being totally honest, that was my interest in visiting. It almost feels like you’re on the set of Planet of the Apes (the original movie, not the lame remake).

Mr. Metka has collected trolley cars from places like Philadelphia (above) and Boston (below).

Some of the oldest and potentially most valuable trolley cars are stored inside the repair shop, protected from graffiti and the elements.

Mr. Metka took us through one of the partially restored trolley cars with power inside it. I couldn’t help but wonder how many thousands of people had sat in those illuminated seats in front of me over the years.

We spent the better part of an hour touring the repair shop of the “Windber Trolley Graveyard”. Certainly with enough money, the infrastructure exists there to do an extensive amount of restoration work on-site.

Touring the Tracks at the Windber Trolley Graveyard

Leaving the repair shop, we then headed out towards the back of the property where 3 parallel lines of railroad track (nearly a mile in total length) house the majority of the trolley cars belonging to the Vintage Electric Streetcar Company.

The easiest way to navigate the property is to walk through the cars themselves, rather than through the high grass and weeds around them.

A few of the trolley cars are so decayed that they almost seem to have their “ribs” exposed to the sky, conjuring up a Mad Max vibe.

Once you get towards the back of the property, things open up a bit and you can wander around on the outside of the cars more easily. Use caution and common sense though – broken glass and pieces of metal could be anywhere underfoot.

Retracing my steps back through the trolley cars, I arrived at the front of the property once again, where numerous trolleys that have been used as “donors” for parts to repair other cars lie scattered about.

My visit concluded, I bid my farewell to the Windber Trolley Graveyard, having crossed another unique Pennsylvania destination off my bucket list.

Being a fan of sci-fi and post-apocalyptic movies, I found the entire setting to be a mesmerizing panorama of “what if civilization came to a screeching halt tomorrow”.

The owner of the property certainly didn’t intend for it to become a graveyard, but rather a historical collection of trolleys to be restored.

At this point in time, the scale seems to be tipped more in the direction of graveyard, but who knows what the future holds for the Vintage Electric Streetcar Company.

In any event, I thoroughly enjoyed my visit to the Windber Trolly Graveyard in Somerset County.

Should you want to visit, the best advice I can give you is to try and contact the owner, Ed Metka.

As mentioned earlier, this is private property (not “abandoned”), so visiting without permission would certainly put you at jeopardy for being charged with defiant trespass.

If you do manage to gain legal access to the Windber Trolley Graveyard, I think you’ll agree it certainly has earned its reputation as a “PA bucket list” destination.

If abandoned transportation history is your thing, then you ABSOLUTELY MUST check out the Abandoned Pennsylvania Turnpike located in neighboring Bedford County.

This 13 mile stretch of abandoned superhighway features two unlit but intact tunnels, each around a mile long!

The Abandoned PA Turnpike can be legally accessed for recreational purposes 365 days a year!

Now owned by the city of Nanticoke, Concrete City is equally fascinating and forlorn.

The abandoned Alvira munitions bunkers are a series of 149 concrete, dome-shaped structures built to house TNT manufactured for the war effort during WWII.

Residing on what is now State Game Lands 252 in Union County, the Alvira bunkers can legally be visited 365 days a year!

The base was abandoned by 1960 and now sits in dormant in the Quehanna Wild Area.

26 Abandoned Places in PA You Can Legally Visit will give you directions to even more of the Keystone State’s best abandoned sites to explore!

If you want to ride on functional, restored trolley cars, plan a visit to the Rockhill Trolley Museum in Huntingdon County, the oldest operating trolley museum in Pennsylvania.