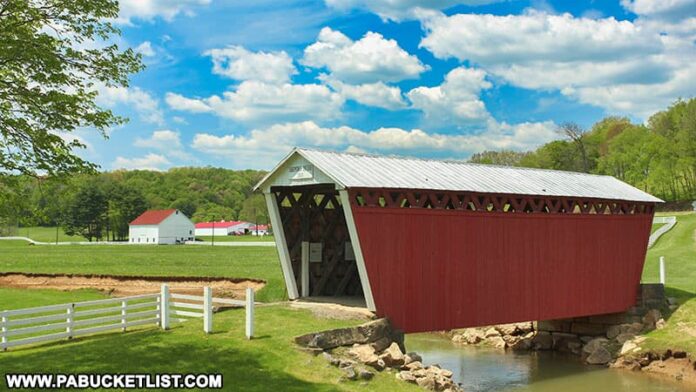 Indiana County was at one time home to at least 48 covered bridges.

Today, there are four remaining covered bridges in Indiana County, all located in close proximity to one another in an area north of the college town of Indiana.

All four Indiana County covered bridges are listed on the National Register of Historic Places, and I’ll provide a brief description as well as directions/GPS coordinates for each one of the bridges in the paragraphs below.

Thomas Covered Bridge in Indiana County was completely rebuilt in 1998 for slightly more than one million dollars, and the results are magnificent!

Trusal Covered Bridge is the shortest covered bridge in Indiana County at 41 feet in length.

Harmon Covered Bridge in Indiana County is the “youngest” of the county’s bridges, built in 1910.

Kintersburg Covered Bridge is 68 feet long, and was bypassed by a “modern” bridge in 1977.

Buttermilk Falls in Indiana County is part of a county-owned park that was once the childhood playground of Fred Rogers, AKA Mister Rogers of children’s television fame.

A modern series of stairs and walkways means that today you can safely stand BEHIND those same Buttermilk Falls that Fred Rogers explored as a child.

The Jonnet Flea Market along Route 22 near Blairsville is one of the finest roadside attractions in neighboring Westmoreland County.

You never know what priceless treasure you’ll find at the iconic Jonnet Flea Market, open in this location since 1982.

The Jimmy Stewart Museum displays an extensive collection of memorabilia related to all phases of his life – from early childhood, through his military career, and of course his extensive acting career.

Exploring the Covered Bridges of Somerset County takes you on a tour of the 10 remaining covered bridges in “America’s County”.

Sachs Covered Bridge in Gettysburg has been called “Pennsylvania’s most historic covered bridge”.