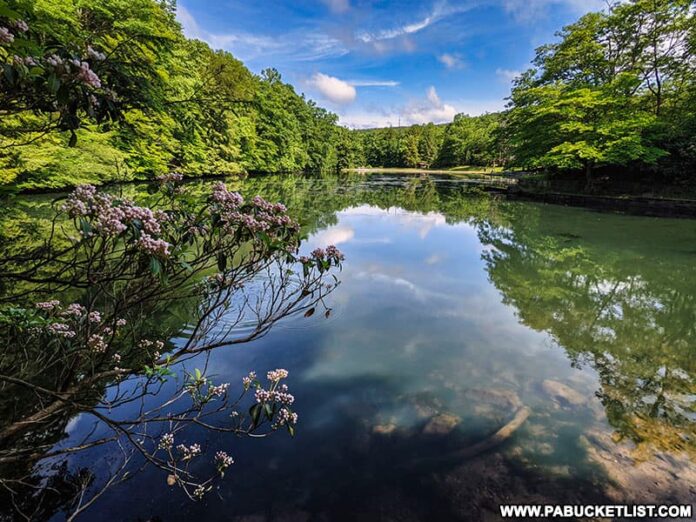 Initially constructed by the Civilian Conservation Corps in the 1930’s, the focal point of the park is 4-acre Kooser Lake.

Kooser State Park and Kooser Run is named for John Kooser, who settled in the western end of the park near Kooser Spring in 1827.

Kooser Run is a stocked, high quality trout stream that runs the length of the park and is the source of water for Kooser Lake.

The Best Things to Do at Kooser State Park

There are numerous picnic tables and grills surrounding Kooser Lake, available on a first come, first served basis, as well as pavilions that can be reserved (or used by anyone when not reserved).

The 0.5 mile Tree Army Trail follows along Kooser Run and is named after the Civilian Conservation Corps, who were also known as Roosevelt’s Tree Army.

The 1.0 mile Kincora Trail is named after a former church camp located where the park now sits.

The Beach at Kooser State Park

There is a small, non-guarded beach at the western end of Kooser Lake.

For those seeking a larger beach experience, Laurel Hill State Park offers that and is just minutes away.

Kooser State Park is one of the many exceptional fall foliage destinations in the Laurel Highlands.

Hiking, boating, swimming, and fishing are just some of the popular pastimes at Laurel Hill State Park.

There’s also a fantastic scenic overlook tower not to be missed!

Cole Run Falls in the Forbes State Forest is probably the second most famous roadside waterfall in Somerset County.

The most famous being the waterfall beneath the Pack Saddle Bridge.

The Barronvale Covered Bridge is the longest covered bridge in Somerset County, at 162 feet in length.

The Barronvale Bridge is just one of ten historic covered bridges you can tour in Somerset County.

Beam Rocks Overlook is just one of more than a dozen fantastic Laurel Highlands vistas.

The Forbes State Forest encompasses more than 50,000 acres in western PA, including waterfalls, scenic vistas, and the highest point in Pennsylvania!