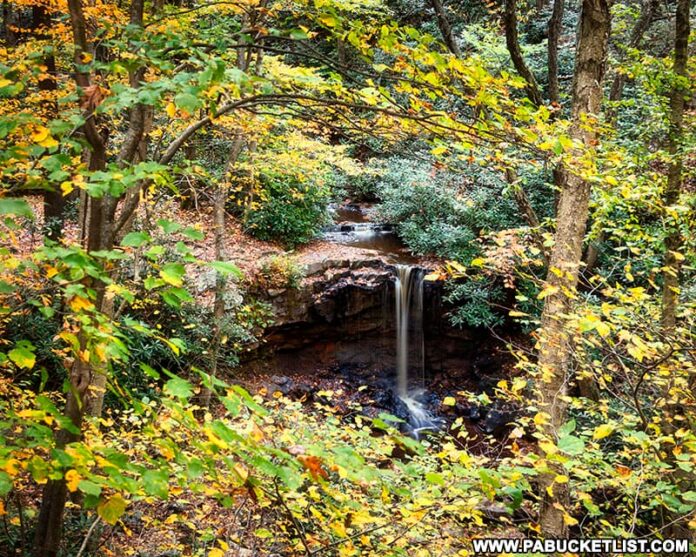 The forest is named in honor of British General John Forbes, who was a prominent figure in this area during the French and Indian War in the 1750s.

From scenic vistas to waterfalls to the highest point in Pennsylvania, here are 7 must-see attractions to check out in the Forbes State Forest!

Mount Davis in the Somerset County portion of the Forbes State Forest is the highest point in Pennsylvania!

At 3,213 feet above sea level, this idyllic mountain setting is home to some incredible views of the surrounding Laurel Highlands.

The observation tower at Mount Davis is probably the most well-known overlook on the mountain.

But there are several other ground-level overlooks nearby, and you find directions to them HERE.

Wolf Rocks Overlook in the Forbes State Forest is an outstanding scenic vista and rock formation in Westmoreland County.

The payoff is at the western terminus of the Wolf Rocks Trail, where it dead-ends into a 180° view of Linn Run State Park and Westmoreland County.

The hike to Beam Rocks Overlook involves a one mile out and back hike along a well maintained trail, with less than 100 feet of elevation change between the parking area and the overlook.

Bogs are typically found at much lower altitudes – Spruce Flats Bog sits on a mountaintop at 2,720 feet above sea level.

Cole Run Falls is probably the most popular waterfall in the Forbes State Forest.

One of the great things about Cole Run Falls is the number of angles you can view and photograph it from.

There are additional waterfalls downstream from Cole Run Falls as well, and you’ll find directions to them HERE.

The Blue Hole is basically a deep roadside swimming hole in the Forbes State Forest.

In the fall it more resembles the “gold hole”, perfect for long-exposure leaf swirl photos.

The Blue Hole is located just a few minutes west of Cole Run Falls, so if you stop at one, make sure to see the other!

In the early 1930s, the Blue Hole Picnic Area in the Forbes State Forest was home to a bustling Civilian Conservation Corps camp, resembling a small village.

Today only the bridge over Fall Run remains, along with a few stoneworks and foundations.

Adam Falls at Linn Run State Park (not to be confused with Adams Falls at Ricketts Glen State Park) is a picturesque 12 foot tall waterfall in Westmoreland County.

The Barronvale Covered Bridge is close to the Blue Hole, the Blue Hole CCC Camp, and Cole Run Falls in Somerset County.