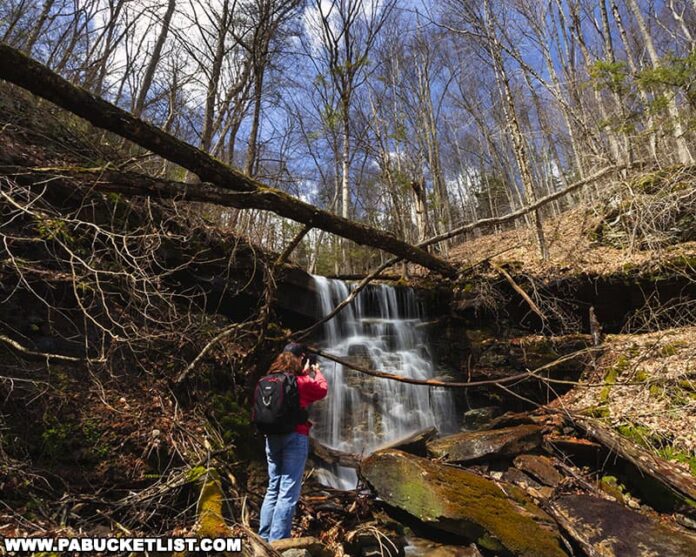 Warburton Hollow Falls is a series of waterfalls along a beautiful mountain stream in the Loyalsock State Forest, 3 miles north of Hillsgrove in Sullivan County.

The hike to and through Warburton Hollow also puts you in proximity to a fantastic “rock city”, full of massive and unusual boulders with small caves and hidden passageways for good measure.

The hike to Warburton Hollow Falls combines parts of the red-blazed Trout Hole Trail with some unnamed/unblazed road grades, and even a bit of off-trail hiking through the rock city.

The entire hike is 2.3 miles long, and the steepest part will be as you ascend the stream itself.

I parked at the bridge along Hoagland Branch Road at GPS coordinates 41.48699, -76.70786 ; although there are some narrow pull-off spots a bit closer to the trailhead, since I knew I’d be gone for several hours I felt better about parking in the larger bridge lot, further off the road.

There’s also a great view to be had standing on the bridge, facing upstream on Hoagland Branch.

From the bridge, walk southeast on Hoagland Branch Road a quarter-mile to the Trout Hole Trailhead at GPS coordinates 41.48636, -76.70283.

While there is no “Trout Hole Trail” signage, the trail itself is a rather obvious road grade and there are faded red blazes to guide you as well.

The Hike to Warburton Hollow Falls

The distance from the trailhead to the bottom of Warburton Hollow is a half-mile, with the first two-thirds being slightly uphill and the last third being downhill to the stream, until the trail intersects with the stream at GPS coordinates 41.48047, -76.69714.

Once you reach the stream, cross it and follow an obvious-but-unblazed trail up the left side of the stream, dropping down to stream level if you see a waterfall you want to photograph or investigate more closely.

There are numerous waterfalls, ranging from 6 feet tall to over 18 feet tall, as you hike upstream in Warburton Hollow.

Many of the falls flow through narrow voids between large boulders.

The upper portion of this waterfall is a solid 12-15 feet tall, and if you include the cascades portion below then its easily in the 18-20 footer range.

It was at this point I crossed over and continued up the right side of the stream, getting a nice side view of this larger waterfall in the process.

The last waterfall of any consequence was this 10 footer.

From stream level I could see massive boulders and ledges protruding from the northern ridge of Warburton Hollow, so I made my way from stream level up the side of the mountain to investigate further.

This “rock city” in Warburton Hollow is a joy to explore, full of surprises.

Since this visit was in early April, the lack of leaves meant a partial view to the northeast from one of the ledges.

I continued off-trail along the ridgeline, in a northeasterly direction, investigating rock formations that interested me.

I eventually picked up an old road grade and followed it to a switchback (located at GPS coordinates 41.48394, -76.70470), then followed the switchback grade downhill until I picked up the Trout Hole Trail once again, retracing my way to the trailhead at Hoagland Branch Road.

Warburton Hollow makes for a great off-the-beaten-path waterfall hike in the Loyalsock State Forest, certainly less popular than say the waterfalls on Ketchum Run or even the waterfalls along Dutters Run.

And when you combine the waterfalls with the amazing “rock city” on the northern ridge of Warburton Hollow, you have the makings of an outstanding and diverse nature hike in the Loyalsock State Forest!

Triple Falls is a magnificent 25 foot-tall, three-tiered waterfall located less than a half-mile upstream from the aforementioned Emerald Falls.

East Branch Falls is a wonderful 25-foot tall waterfall on the East Branch of Mill Creek in the Loyalsock State Forest.

Middle Branch Falls is located along Camels Road in the Loyalsock State Forest.