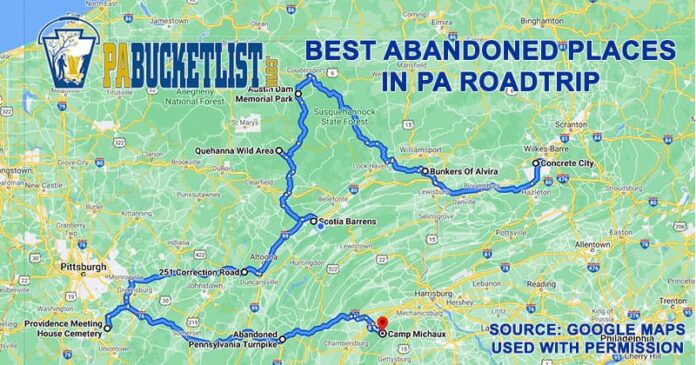 Does the thought of taking an epic road trip to see the best abandoned places in PA intrigue you?

If so, you’re in the right place!

What follows is a 587 mile route I came up with that takes you to nine of Pennsylvania’s most intriguing abandoned places.

Best of all – all of these abandoned places are LEGAL TO VISIT!

This is an itinerary that you can tailor to meet your own interests and time constraints.

Simply click on the blue text links to view details/directions to each of the seven Pennsylvania abandoned places mentioned in this article.

Many of these properties are not maintained or monitored for safety conditions, and therefore these are all strictly VISIT AT YOUR OWN RISK DESTINATIONS!

At the time of its construction in the early 1900s, Concrete City in Luzerne County was considered to be a “community of the future”, but it was abandoned a mere 11 years after the first residents moved in.

Today, the 20 concrete duplexes that make up Concrete City sits on a 60 acre parcel of land owned by the Nanticoke General Municipal Authority.

You’ll find a map and directions to Concrete City at this link.

The abandoned Alvira bunkers in Union County were used to store explosives as part of the American WWII war effort.

Today, the 149 dome-shaped concrete bunkers are gradually being reclaimed by nature.

In addition to the bunkers, you’ll find the cemetery of the ghost town of Alvira near the bunker complex.

The abandoned Bayless Paper Mill in Potter County is forever linked to the collapse of the Austin Dam and the second-deadliest flood in Pennsylvania history.

On September 30, 1911 the Austin Dam broke, unleashing 400 million gallons of water in a torrent that tore through the narrow freeman Run valley, destroying the paper mill before reaching and destroying most of the town of Austin as well.

The Bayless Paper Mill was rebuilt after the flood, and remained operational until a massive fire in 1944 caused it to close forever.

Today the Bayless Paper Mill is part of the Austin Dam Memorial Park in Potter County.

Constructed and used between 1955-1960, these bunkers continue to fascinate visitors to this day.

All that remains of the abandoned Quehanna nuclear jet engine testing bunkers today are the large shells of concrete and steel with tiny slit windows once covered by thick layers of blast-resistant glass, where engineers and technicians would have monitored the engines undergoing testing.

5. The Ghost Town of Scotia

Built in the late 1800s, the company town of Scotia, built by one of the richest men in the world at the time, served as home to employees of Andrew Carnegie’s Scotia Mines and Iron Works.

Scotia is also the burial spot of Bert Delige, convicted murderer who was publicly hanged at the Bellefonte jail courtyard on April 25, 1911, the last public hanging in Centre County.

To this day, rumors of a large, black, human-shaped figure wandering the Scotia Barrens persist, and sightings seem to peak around the date of Delige’s execution on April 25th.

SCI-Cresson in Cambria County closed June 30, 2013, with the State citing the antiquity of the prison and rising costs of maintaining it as the primary reasons for the closure.

Let me reiterate: THE PRISON GROUNDS ARE NOW PRIVATE PROPERTY – YOU MUST SCHEDULE AN APPOINTMENT TO VISIT!

However, the very modest entry fee is more than worth it for the size and scope of the property you get to explore at the abandoned Cresson State Prison.

This abandoned stone chapel gained notoriety in the 1980’s when stories surfaced of a secret witch trial and execution that were said to have taken place in the old abandoned Quaker meeting house.

The rumors persist to this day, fueled in part by what looks like the ghostly image of a woman burned into one of the the boarded up back windows of the chapel.

The largest and most famous of all the destinations on this road trip is the Abandoned PA Turnpike!

Highlights of the Abandoned PA Turnpike include two eerily dark tunnels along the route, both roughly a mile long.

This relic of the nation’s first superhighway is now a desolate hiking / biking trail in Bedford and Fulton counties.

You’ll find maps/directions to the trail heads at either end of the Abandoned PA Turnpike at this link.

Exploring an Abandoned POW Camp in Cumberland County will show you how to find a secret POW camp set up during World War Two that housed German and Japanese prisoners in a remote section of the Michaux State Forest.

The Pine Grove Furnace POW Camp, as it was known at the time, was classified as “secret” and no civilians worked there or were allowed to have knowledge of the camp.

So there you have it – one epic road trip to nine of PA’s best abandoned places that you can LEGALLY explore!

Explore one, or explore them all, but enjoy the ride no matter what!

20 Abandoned Places in PA You Can Legally Explore will give you nearly a dozen more spots to check out if the old and abandoned tickle your fancy!