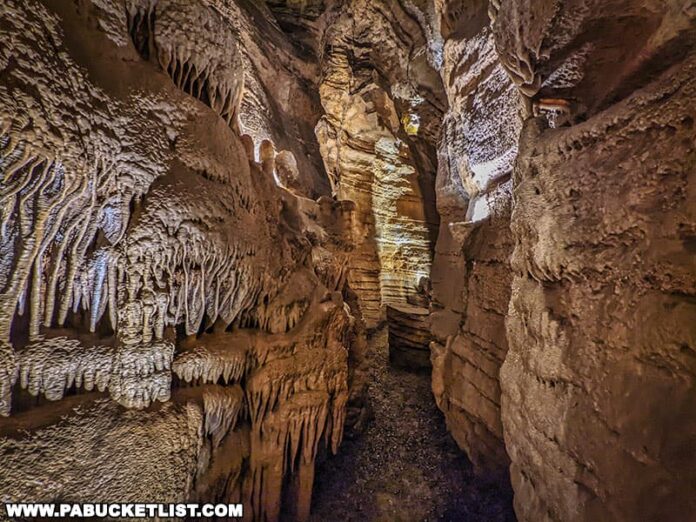 Lincoln Caverns gives visitors the opportunity to explore an incredibly beautiful world far below the surface of Huntingdon County!

Formerly known as William Penn Caverns in the 1930s, Lincoln Caverns is a family-owned and operated “show cave” that has welcomed tourists for more than 90 years.

Discovered during the construction of Route 22 in 1930, the Lincoln Caverns tour visits both the original cavern as well as Whisper Rocks cavern, discovered just prior to World War 2 on the hill above Lincoln Caverns.

Join me now as I show you the best things to see and do at Lincoln Caverns in Huntingdon County.

The Visitor Center at Lincoln Caverns resembles a log cabin, and is located at 7703 William Penn Hwy, Huntingdon, PA 16652.

Inside the Visitor Center at Lincoln Caverns

The Visitor Center at Lincoln Caverns is well stocked with all the typical souvenirs you’d expect to find at a tourist attraction – t-shirts, stickers, magnets, etc.

There’s also a nice collection of rocks and gemstones, since many cave enthusiasts are also rock collectors.

Another popular attraction is a sluice where kids (of all ages) can “pan for gems”, located right next to the Visitor Center.

Tours leave from the Visitor Center, and the first stop is Lincoln Caverns.

Most of the passageways are large and easy to navigate, although there are a few tighter spots here and there.

The tour guide will point out some of the especially-attractive formations, like the “Frozen Niagara”, which measures 90 feet long and 110 feet high.

The second part of the tour takes you up a set of stairs to the entrance to Whisper Rocks cavern, located up the hill from Lincoln Caverns.

Whisper Rocks is a multi-room cavern that, in my opinion, is probably even more photogenic than Lincoln Caverns.

Whisper Rocks was added to the tour in the 1960s, and is named for the “whispering” sounds air makes as it passes through the caverns.

The largest room on the tour of Whisper Rocks is known as The Cathedral, and according to the tour guide people really have held weddings inside the caverns.

Lincoln Caverns is open daily from 9 am – 4 pm, with ticket prices varying depending on what type of tour you are taking.

In addition to regular sightseeing tours, they hosts school field trips, scout camps, holiday-themed tours, and even blacklight tours on select dates during the year – you can find dates and pricing for all of these by visiting the Lincoln Caverns OFFICIAL WEBSITE.

Hawn’s Overlook is the most famous of four scenic overlooks at Raystown Lake.

The 1000 Steps along the Standing Stone Trail is one of the most famous hikes in Huntingdon County.

The Isett Heritage Museum houses and displays over 40,000 items from everyday life in the 19th and 20th centuries.

The Swigart Auto Museum in Huntingdon County is the oldest automobile museum in the United States!

18 Must-See Attractions in Huntingdon County is your guide to even more great destinations near Lincoln Caverns.